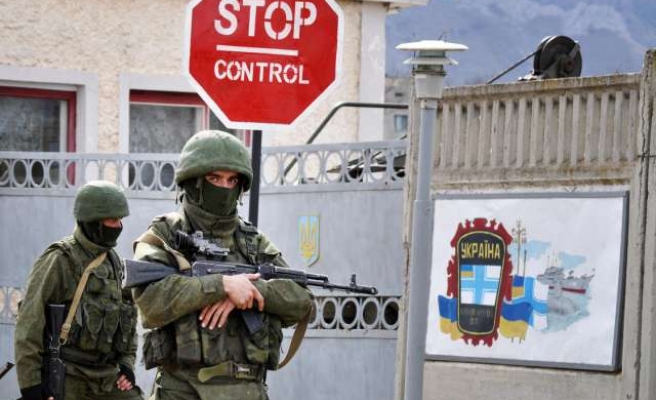 Turkey's Foreign Minister Mevlut Cavusoglu said his country does not recognize the de facto situation in Crimea on Thursday.

Cavusoglu made his comments at the 21st Organization for Security and Cooperation, or OSCE, Ministerial Council meeting in Basel.

"Turkey believes that the solution to the crisis in and around Ukraine should be a negotiated political settlement respecting the independence, sovereignty, political unity and territorial integrity of Ukraine," he said.

More than 4,000 people have been killed and around 9,000 wounded in the conflict between the Ukrainian government and pro-Russian separatists in eastern Ukraine since mid-April, according to a UN report.

The conflict has also caused massive damage to infrastructure which, the Ukrainian government said in September, will cost around $800 million to restore.

"We also do not recognize the de facto situation in Crimea," Cavusoglu added. "The crisis in Ukraine has undermined European security and challenged its basic principles."

A referendum on the status of Crimea was held on March 16, 2014. A majority of the Crimean population voted to become part of the Russian Federation. The U.S. and EU denounced the referendum as illegitimate, as the region was occupied by Russian soldiers at the time.

The foreign minister also highlighted OSCE's activity, saying that the crisis in and around Ukraine underlined the organization's relevance in an environment increasingly characterized by risks and challenges.

"The OSCE has proven its importance in our common quest for security, stability and the rule of law in our expansive region," he said. "A way out of this deadlock goes through the development of a new culture of engagement, a new methodology and a new operational modality that will enable us to make best use of this exceptional platform."

On the sidelines of the meeting, Cavusoglu talked with Albanian and Austrian foreign ministers as well.

During his meeting with his Austrian counterpart Sebastian Kurz, the two ministers discussed the recent developments in Syria and Iraq and how to stop terrorist group Islamic State of Iraq and the Levant.

According to the German authorities, some 3,000 citizens from Western European countries, including 400 Germans, have joined the ranks of the Islamic State of Iraq and Levant, among them 1,000 French nationals.

Cavusoglu also held talks with Belgian Foreign Minister Didier Reynders about Turks living in Belgium. According to the diplomatic sources, the two ministers agreed that Turks in Belgium are an "important bridge" between the two countries.

The Turkish foreign minister also held talks with his Serbian, Maltese and Thai counterparts about bilateral relations between Turkey and their countries.

The two-day OSCE Ministerial Council meeting will continue tomorrow in Basel, with a debate on the fight against terrorism.