History was made six years ago when Turkey's football team travelled to Yerevan to play Armenia in a match charged with emotional and political significance. 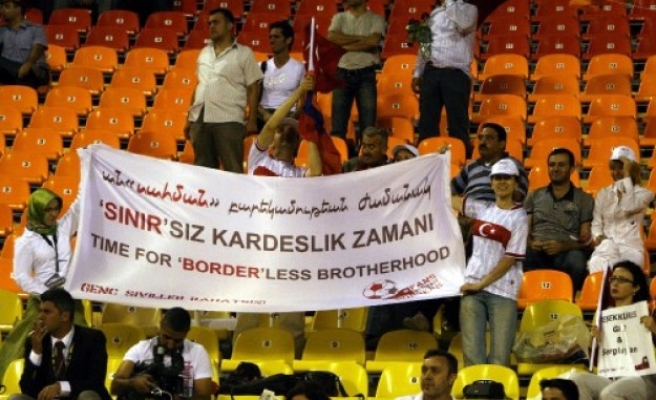 Six years ago tomorrow, the Hrazdan Stadium in the Armenian capital of Yerevan erupted into a wall of noise as two unlikely opponents lined out in the first World Cup meeting of Armenia and Turkey -- a match which became the first round of the so-called 'football diplomacy' between the two troubled neighbors.

Amid the flags, anthems, jeers and whistles, Turkey’s Abdullah Gul, who recently stepped down as president, made a small piece of history. By accepting an invitation from his Armenian counterpart, Serzh Sarkisian, he became the first Turkish head-of-state to visit Ankara’s smaller neighbor.

Gul’s visit was an uncharacteristic display of good neighborliness -- the two countries still do not have diplomatic ties, a situation with roots in a longstanding and bitter dispute over events from the First World War.

Turkey strongly rejects allegations by Armenia and several other countries as well as some historians that the killing of an estimated 1.5 million Armenians during 1915 in the Ottoman Empire amounts to "genocide," saying the death toll is overblown and that many of the fatalities were due to starvation and disease.

This provided the backdrop to the charged atmosphere in Yerevan for the World Cup qualifier match. Amid fears of fighting between fans Turkey's coach Fatih Terim called for calm, saying: "This is only a football game not a war. We cannot carry the weight of history on our shoulders."

"The match was definitely beyond a sport activity," says Turkish academic Ahmet Han from Istanbul’s Kadir Has University. "It was a step of public diplomacy towards improving bilateral relations with Armenia."

This view is shared by the Turkish team’s then-trainer, Mufit Erkasap, who tells the Anadolu Agency that the match -- despite a 2-0 win for the visiting Turks -- contributed to improved relations between Armenia and Turkey.

Erkasap says that the presence of the Turkish president at the match gave his footballers the confidence to play better and feel better.

Team doctor Cengiz Dinc agrees: "That the president attended the match helped us get rid of stress."

Dinc says his players were stressed due to "disturbing stares at the Turkish team" from the time their plane landed at Yerevan’s airport until they arrived at their hotel.

"I felt the same stares in the street when we were walking around the city," he claimed, recalling a heightened sense of tension around the capital.

"Despite all the negative feelings, however, I still believe that the match was a significant step towards better relations between the two nations because all kinds of sport also serve as a bridge that makes people forget about their disappointment and hostility."

The historical debate influenced many Armenian supporters during the 2008 match.

"Some fans were carrying banners about the 1915 killings and shouting angrily to Turkish footballers," Erkasap says, adding that the number of Turkish fans at the match was less than 1,000, lost amid a sea of Armenian supporters.

He said Armenian fans booed Turkey's anthem at the start of the game and that they also protested against Turkey by whistling.

Abdullah Gul’s visit also created nationwide controversy in Turkey. Not everybody was pleased about the initiative, with many arguing that the president should not go before problems between Armenia and Turkey were resolved.

Erkasap claims that those discussions on Turkish media stressed the footballers: "We helped them relax with psychological support," he says.

On the other hand, a statement on President Gul's website which was released prior to the match was full of hope. In it he said: "This opportunity should be used in the best way. We believe that our visit will contribute a lot to creating a new atmosphere of friendship in the region... And the match will help clear the way for reconciliation between the two sides who share a common history..."

Only one year later the Armenian president paid a visit to Turkey's northwestern Bursa province to join Gul at the second-leg of the World Cup qualifier, which Turkey again won 2-0.

The meeting was regarded the latest round in the "football diplomacy."

"Such organizations are vital in that they are the gestures of goodwill, and they also help create awareness on these matters," says Han, who argues that the momentum from these ground-breaking events was not maintained.

"However," he continued, "we could not see any follow-up acts of goodwill... In order for the countries to better establish faith in each other, public diplomacy should be carried on with small but continuous steps in a 'baby-step approach,' which will offer a safe feeling of being in control and fully confident in each step."

The legacy of these two games can been seen in the improved relations between the two countries. Armenia sent its foreign minister, Eduard Nalbandyan, to Ankara on August 28 to attend the presidential inauguration of Recep Tayyip Erdogan.

However, the future depends on diplomacy dealing with difficult issues like the relations between Azerbaijan (a Turkic country situated at the crossroads of Eastern Europe and Western Asia) and Armenia -- a conflict which has strained Ankara and Yerevan’s reconciliation process.

"Armenia must make peace with Azerbaijan before it can fix its relations with Turkey," President Erdogan said Wednesday in a joint press conference with his Azerbaijani counterpart, Ilham Aliyev.

Nevertheless, for team doctor Dinc that night in Yerevan is something which he will never forget: "Both the match and the visit to the country was one the most interesting ones in my career, with mixed feelings of excitement, stress about our historical debate and hope for victory."