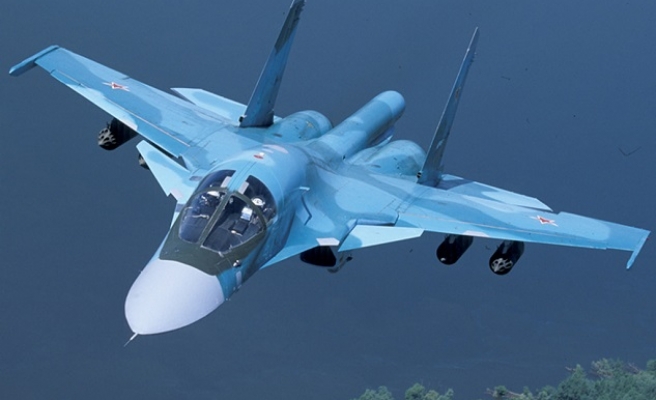 An official statement released on Saturday said that the Russian craft -- a SU-34 fighter-bomber -- was repeatedly warned by Turkish air radar units in Russian and English.

The Turkish Air Force has declared an 'orange alert' in key bases around the country, military sources have said.

Speaking to reporters at Istanbul Ataturk Airport before his departure for Chile, President Recep Tayyip Erdogan said the violation of Turkish airspace, which he also described as NATO airspace, was a result of Russian attempts to escalate existing tension in the region.

"Russia will have to bear the consequences if the violations continue," he said.

"Russia must take all necessary measures to ensure that such violations do not happen again," he added.

Erdogan said the Turkish Foreign Ministry had made contact with Russia to arrange a meeting with President Vladimir Putin to discuss the incident, but added that Ankara had yet to receive a response.

Meanwhile, the Russian Defense Ministry has claimed that their fighter jet did not violate Turkish airspace.

Ministry spokesperson Igor Konashenkov dismissed Ankara's statement as "propaganda", arguing that Russian and Syrian air radar units did not detect any violations and that there has long been no radio contact between Turkish and Russian air forces.

In late November, two Turkish F-16 fighter jets on an aerial patrol intercepted a Russian military plane within the rules of engagement when it intruded into Turkish airspace on the Turkey-Syria border.

The intruding jet was warned about the violation 10 times within five minutes before it was shot down.

After the incident Russia imposed a range of unilateral economic sanctions against Turkey including a ban on food imports.

Turkish Prime Minister Ahmet Davutoglu said in a joint press conference with Jens Stoltenberg on Nov. 30 that Turkey should not be asked to apologize for doing its duty in protecting its borders and airspace.

Moscow had demanded an apology for the shooting down of the SU-24 over southern Turkey.