Turkey says all formations in treason to be dealt 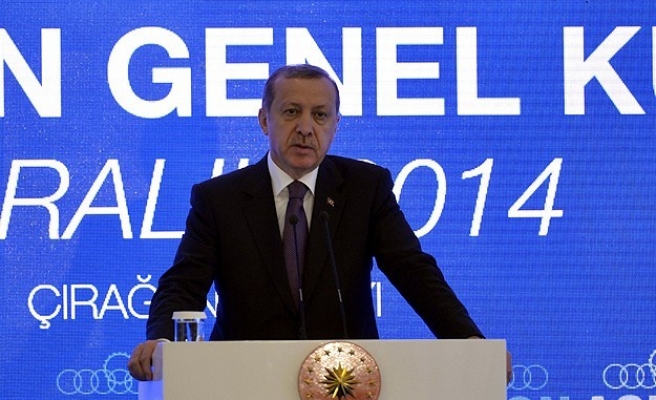 Turkish President Recep Tayyip Erdogan on Saturday pledged that there would be "no mercy" for any type of treason.

Erdogan referred to the parallel structure which the Turkish government says has grown up illegally inside the state, in his speech at a meeting of Turkish businessmen in Istanbul.

The Turkish president also denied reports that the Turkish Security Council, a body that brings together the highest state officials, had blacklisted all types of religious communities.

Erdogan said: "Some very well-known circles have started a campaign. They try to spread such lies."

Some Turkish media had reported that the state decided to launch a campaign against all types of religious communities, during the council's latest meeting, on Oct. 30. The reports were denied by the Security Council itself earlier in the week.

"Everyone is free to conduct their activities under the condition of not violating the law or threatening Turkey's national security. But any type of group that threatens our national security, and is treasonous, will be dealt with by the Security Council, and no mercy will be shown," he said.

"The parallel structure is this kind of group. We have confronted it, and will continue to do so. And this is a decision taken by the Security Council."

"Parallel structures and illegal groups conducting operations under an internal or external legal facade" had been named as a threat to national security and public order in Turkey at a press statement after the council's meeting.

The term "parallel state" has been used by the government since late 2013 to describe supporters of the Gulen movement, a religious network led by U.S.-based Islamic preacher Fethullah Gulen, who officials say have infiltrated the state and are attempting to overthrow the government.

Erdogan also said that if the anti-government protests of the last year had not been controlled, Turkey would be in a similar situation to Egypt or Ukraine, both of which are suffering political and civil crises.

"Where would Turkey be if those protests were not controlled? They have no answer for that. But the answer has been given by Egypt and Ukraine. A bloody coup was put through in Egypt, under the pretext of street protests," Erdogan said.

The elected president Mohamed Morsi was ousted by the army in July of last year.

Addressing criticism for his responses to opposition leaders on a number of issues from the new presidential palace to election thresholds, Erdogan said: "Some say a president should not answer back to all these. I am not a usual type of president, I never have been, and never will be."

The president has been criticized by the opposition for "overspending” on the construction of the new presidential palace, known as "White Palace," in Ankara. Erdogan has said that the palace was built according to the architectural heritage of the Ottoman and the Seljuk dynasties, and so will be an important monument to be handed down to the next generations.