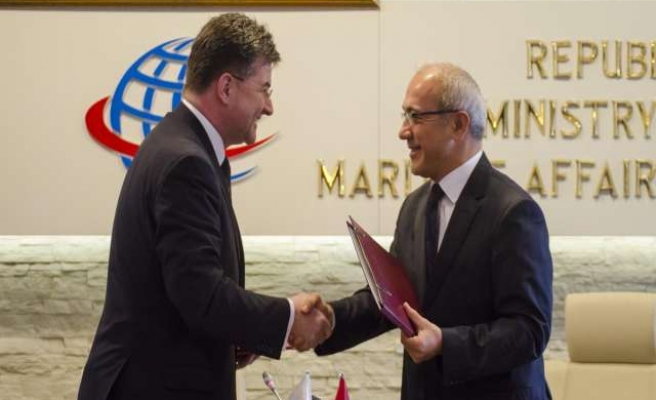 At a joint press conference, they commented on a number of world issues, including the CIA torture report, Turkey's EU membership and relations between the two nations.

"Transparency is obviously important but this torture has no excuse to explain it," Turkish Foreign Minister Mevlut Cavusoglu said. "I hope our friend and ally, the United States, won't repeat these kinds of actions."

A scathing U.S. Senate report issued Tuesday said that use of torture by the CIA following the Sept. 11 attacks was more brutal and extensive than initially thought.

The 6,000-page report, of which just 500 pages were released in an executive summary, received worldwide criticism for torture and detention methods used by the agency.

Slovakian Foreign Minister Miroslav Lajcak said the release of the report "serves a guarantee that things like that will never ever happen in the future."

During the visit, Lajcak signs a transportation agreement with Turkish Minister of Transport and Communication Lutif Elvan.

Lajcak is also due to meet with Turkey’s Minister for EU Affairs and Chief Negotiator Volkan Bozkir.

Cavusoglu said trade volume between the two countries stood at 1.5 billion dollars and both nations are working to increase it to 5 billion.

"Last year, 130 thousand Slovaks were in Turkey for the summer holidays," Lajcak said. "We are pleased with Turkey's tourism service."