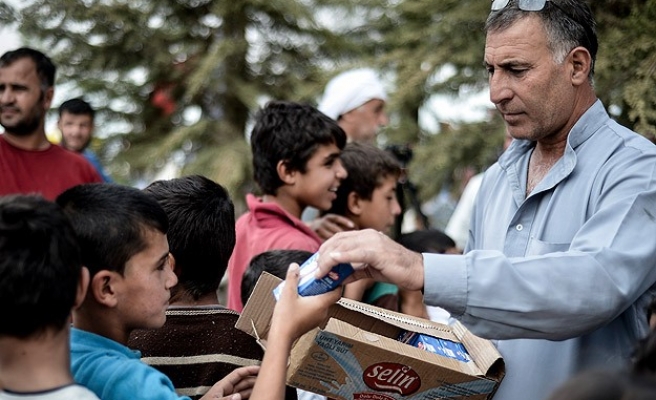 The financial cost of Syrian refugees on Turkey has reached $4.5 billion, including $2.3 billion from the central government budget, the country’s finance minister said on Tuesday, in response to a parliamentary question from deputies.

An estimated 1.6 million Syrian refugees are currently being sheltered in camps across Turkey, including 200,000 who have recently fled fighting in the border town of Kobani.

According to an Ankara-based Hacettepe University report, as of October 2014, Turkey is hosting over 1.5 million Syrian people – with 1.4 million of these living outside of official camps.

Based on data from Turkey’s Interior Ministry, 72 of 81 Turkish provinces are currently home to Syrians who have fled their country.

Finance Minister Mehmet Simsek said today: “We are not only spending from the budget. There are efforts by local authorities. The most recent figure is $4.5 billion.”

Last week, Turkish deputy foreign minister Naci Koru called on Western countries to do more to help refugees from Syria and share the burden on those bordering the conflict.

Koru said a heavy burden was being borne by Syria’s neighbors, and nations like Lebanon and Jordan, which were already overstretched, were concerned about security and stability.

He said: "Turkey is hosting more than 1.5 million Syrians and so far has spent more than $4 billion. Unfortunately, we only received $200 million to $250 million from abroad."

According to the U.N. High Commissioner for Refugees, more than half of Syria’s population has been forced to flee their homes, seeking refuge in Turkey, Lebanon, Jordan and Iraq.

Nearly 6.5 million civilians have been displaced within Syria and nearly 11 million Syrians are in need of aid within the country.

"Those states who calculate for days whether to take or not ten refugees are advising Turkey," said Turkish deputy prime minister Tuesday.

As Western countries have criticized Turkey over its policy with regards to Kobani -- a Syrian city near the Turkish border, which remains besieged by ISIL militants since September -- Yalcin Akdogan pointed out Turkey's humanitarian track record.

"We opened our gates and our hearts to 1.5 million of Syrian refugees," said Akdogan, speaking in Antalya, in western Turkey. "We have spent nearly $5 billion for Syrian refugees."

Ankara has namely opened its borders to nearly 180,000 Syrian Kurds from Kobani and has also facilitated the passage of Iraqi Kurdish peshmerga forces through Turkey, in order for them to join fight against ISIL.

Akdogan said that Turkey was sending aid across the world without waiting for anything in exchange.

"Turkey is helping those in need without questioning their ethnicity or religion," Akdogan said.

"Development Initiatives," a London-based independent organization which focuses on the analysis and use of data for the elimination of poverty, established Turkey as the third country in the world -- after Luxembourg and Sweden -- providing  the most humanitarian aid in proportion to its national income, in 2013.

“We do not have oil wells, but we are a powerful country with a big heart," Akdogan said.