'Turkey to be a shield for civilians in Syria's Idlib' 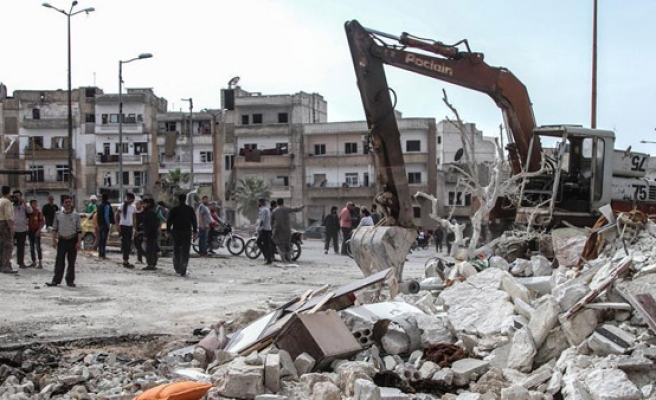 Residents of Maaret al-Numan city in Syria’s northwestern Idlib province hail the deployment of Turkish troops in the area to monitor the ceasefire as a “shield” against threats to their lives.

“There are massacres going on everyday here. If Turks had not entered into Idlib, this condition would have continued like this,” Mohammed Elday, 23, a local resident, told Anadolu Agency.

“There is no room for PKK here,” he said, adding that the Turkish deployment "will make Syrian regime forces, ISIL and PKK unable to stay here”.

Abdulgaffar Zikri, 25, a local resident, said the PKK will not be able to enter Idlib, since the opposition Free Syrian Army is deployed on the border.

“If Turks had not entered, civilians would have lived in fear,” he said.

Sherif Rahum, a 46-year-old teacher, highlighted the deeply-rooted relationship between Syria and Turkey.

“Turks have always done things in accordance with good neighborhood relations,” Rahum said. “We have been living together with Turks for centuries, so the endearment between the two nations is nothing new.”

The Syrian civilian went on to warn that it would be disastrous if the PKK entered the region.

On Friday, the Turkish Armed Forces said it began establishing observation posts in Idlib to monitor de-escalation zones that aim to bring an end to the six-and-a-half-year conflict.

The operation in the northwestern region was launched under a May deal between Turkey, which backs groups opposed to Syria’s Bashar al-Assad regime, and Russia and Iran, who support Assad.

The agreement -- signed during peace talks in Kazakhstan’s capital Astana -- aims to establish a number of de-escalation zones so as to ensure the continuation of a cease-fire agreed last December between the three guarantor nations.

According to the Turkish military statement, the de-escalation zones have been created to “enhance the effectiveness of the cease-fire, end conflicts, bring humanitarian aid to those in need [and] establish the necessary conditions for the return of those displaced”.