Turkey to play role in fight against ISIL

Commenting on Turkey's future participation, Hagel said: "They want to play roles, specific roles. They will play those." 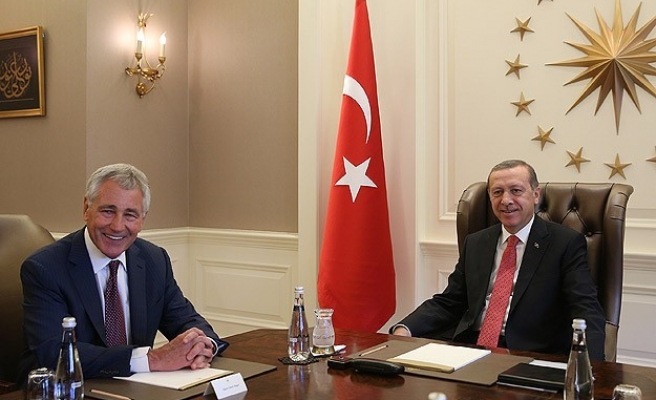 Turkey was the only Muslim nation in a "core coalition" of 10 countries which met on the sidelines of a NATO summit last week. Any role it plays may be limited by a host of concerns, including fears for 46 Turkish hostages held by the militants.

"Today's meetings were a reaffirmation, clearly, of Turkey's commitment to be part of this effort, to destroy ISIL and everything that ISIL represents," Hagel said after talks with Turkish President Tayyip Erdogan and other leaders.

Commenting on Turkey's future participation, Hagel said: "They want to play roles, specific roles. They will play those."

"Those will be articulated by the Turkish government - not by me - when that decision is made," he added.

Asked about how the hostage crisis might limit Turkey's response, Hagel said: "Each country has its own separate limitations, its own separate political dimensions. We have to respect those."

An ally in the U.S.-led NATO military alliance, Turkey has sensitive relations with sometimes unstable neighbours, bordering both Syria, the origin of the ISIL threat, and Iraq, where the group is holding the Turkish hostages.

Turkey has the second-highest number of Syrian refugees on its territory after Lebanon, with more than 840,000, according to U.N. figures.

"By geography, Turkey is going to be absolutely indispensable to the ongoing fight against (IS), because of just where they sit, the access we currently already have militarily and the cooperation that we have militarily," the official said, speaking on condition of anonymity.

Turkey's ties with Washington are slowly improving after strains over the past year.

Erdogan acknowledged as recently as July that relations with U.S. President Barack Obama had soured, saying the two no longer spoke as frequently as in the past. He has voiced disappointment at a lack of U.S. action over the war in neighbouring Syria.

Hagel's trip followed a meeting between Obama and Erdogan at the NATO summit in Wales last week, and other high-level U.S. officials are expected to travel to Turkey in the coming weeks.

Hagel said both nations were facing a "clear and new sense of very real threats".

"That certainly is forging a renewed sense of a relationship," Hagel said.

Foreign Minister Mevlut Cavusoglu said on Monday Turkey was ready to play the role required of it by its NATO allies but added Ankara did not want weapons falling into the hands of "terrorist" organisations or of the PKK Kurdish militant group.

"We have said, regarding the threats in the region, we will act in accordance with our allies and that we would do our part," he told the state-run Anadolu news agency, adding that Turkey understood the "realities of the region".

Turkey has long argued that the sectarian policies of Syrian President Bashar al-Assad and former Iraqi Prime Minister Nuri al-Maliki were partly responsible for sowing the seeds of radicalisation and enabling ISIL to thrive.

It is also concerned about the Kurdistan Workers Party (PKK) militant group, which waged a three-decade insurgency against the Turkish state but is now engaged in a delicate peace process with Ankara.

The PKK, considered a terrorist group by the United States, European Union and Ankara, has become an unlikely ally in the battle against ISIL, with its fighters playing a key role on the front lines of northern Iraq.

"Weapons that go to this region should not fall into hands of terrorist organisations and the PKK. We have expressed our sensitivities about this," he said.