Turkey 'to retaliate' if abducted staff harmed in Iraq

'No one should dare test Turkey's power,' says Turkish foreign minister after consulate staff and families abducted in Mosul by ISIL militants 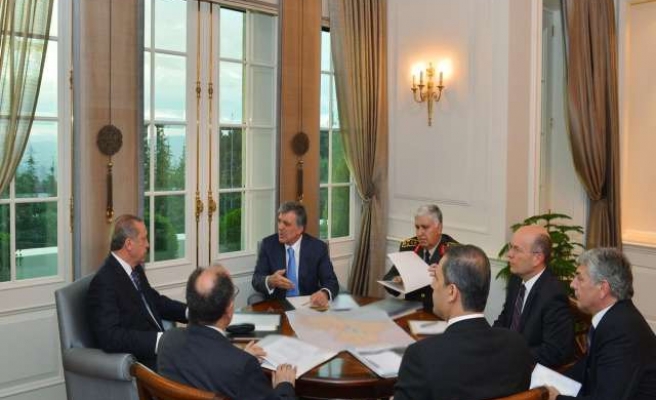 Turkish foreign minister has warned that Ankara will not allow anyone harming its nationals to go unpunished after 49 Turkish consulate staff members were abducted by Islamic State of Iraq and Levant militants in the Iraqi city of Mosul.

Davutoglu said Wednesday that the Iraqi government was responsible for the security of its consulate workers after the staff, including the consul-general and family members, were seized in Iraq's second-largest city earlier in the day.

"No one should dare test Turkey's power," said Ahmet Davutoglu, as he prepared to leave a UN meeting on counter-terrorism in the United States to return to the Turkish capital to deal with the incident.

He said: "We sent an evacuation order to the the consulate three days ago. However, as clashes have intensified, we left the decision up to our staff there.

"We were informed by the Iraqi government that the evacuation of our staff would be riskier, without security being provided, than staying within the consulate."

He added that the Iraqi government was responsible for the group's welfare.

Calling for "solidarity," he said: "What is important in such circumstances is not to panic and to draw a road map for the security of our citizens."

The abductions came a day after ISIL took control of Mosul and seized 31 Turkish truck drivers who were transporting fuel to a thermal power plant.

Both the consulate staff members and Turkish truck drivers were reportedly in good health and had not been ill-treated.

UN Secretary General Ban Ki-moon condemned the attack and the abduction of the Turkish nationals.

Ban said: "This is totally unacceptable. I am condemning in the strongest possible terms such a terrorist attack against diplomatic officers.

"I'm urging the Government of Iraq, and broadly the regional countries and the whole international community, to be united to bring all these perpetrators to justice and to do all that is possible to have these diplomatic officers released safe and sound as soon as possible."

More than 300,000 residents have fled Mosul, where security forces and militants have been clashing since Friday.

Iraqi Prime Minister Nouri al-Maliki said Tuesday that Iraq had been placed on "maximum alert" and called on the Iraqi parliament to declare a national state of emergency.