Turkey, US will soon begin joint patrols in Manbij

Turkey expects Manbij roadmap to be implemented as planned, with no delay, says presidential aide. 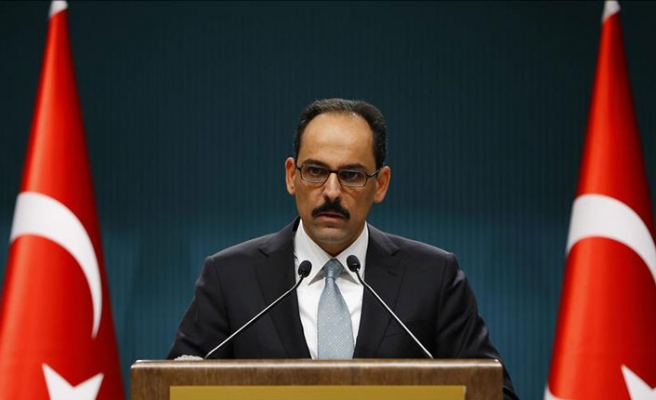 Turkey is working with Russia on how a disarmament zone inside Idlib, Syria will be set up and how terror groups will be driven out, a Turkish presidential aide said on Friday.

Speaking to reporters in the capital Ankara, Ibrahim Kalin said Turkey’s National Intelligence Organization (MIT), the Turkish Armed Forces (TSK), and special forces are working in coordination with Russia in the field.

Under the pact, opposition groups in Idlib will remain in areas in which they are already present, while Russia and Turkey will do joint patrols in the area with a view to preventing renewed fighting.

Kalin also said that Turkey expects the Manbij roadmap with the U.S. to be implemented as planned, with no delays.

“The Manbij roadmap is an important deal. We will stick to this and will do what is necessary.”

“But, simultaneously, the U.S. administration continuing to engage with the YPG and PYD is a source of serious concern to us,” he added.

The Manbij deal between Turkey and the U.S. focuses on the withdrawal of the PKK-affiliated YPG terrorist group from the city in order to stabilize the region.

Washington has claimed the YPG is a “reliable ally” in the fight against Daesh, while Ankara has pointed to its status as an offshoot of the PKK, a recognized terrorist group which has taken some 40,000 lives in Turkey.

Syria has been locked in a vicious civil war since early 2011, when the Assad regime cracked down on protesters with unexpected ferocity.