PM Davutoglu said “We cannot leave the fate of our friend and brother countries Syria and Iraq to the international coalition’s decision-making process, in which we do not participate.” 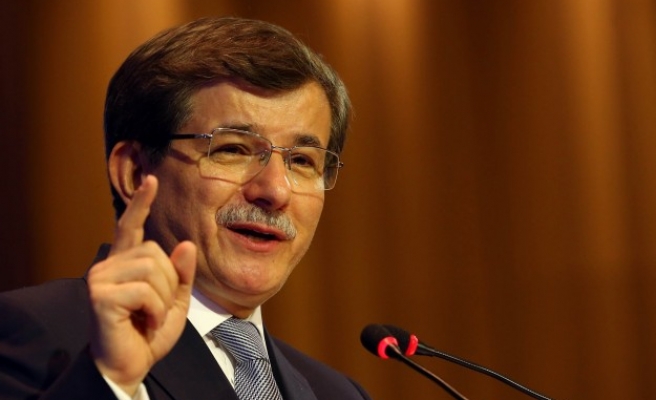 Turkey does not want the predominantly Kurdish town of Kobani, near its border with Syria, to fall to ISIL and will do what it can to prevent that from happening, Prime Minister Ahmet Davutoglu said late on Thursday.

"We wouldn't want Kobani to fall. We'll do whatever we can to prevent this from happening," Davutoglu said in a discussion with journalists broadcast on the A Haber television station.

Davutoglu has blamed a lack of cooperation between opposition groups in Syria for failing to stem the advance of fighters.

Davutoglu said the people of Kobani, a Syrian Kurdish city besieged by the ISIL, for more than two weeks, were paying the price for the failure of the Kurdish Democratic Union Party to join forces with the Free Syrian Army.

Davutoglu said the government contacted the Kurdish PYD and the FSA last year and told them to act together to "avert the terror threat and regime attacks in the northern belt."

He added: "If the PYD, instead of cooperating with the regime, had joined forces with the FSA and with the opposition, ISIL would not have found that much opportunity in the field."

The attack on Kobani -- just across the Turkish border -- and surrounding villages has led to 160,000 refugees seeking sanctuary in Turkey.

Joint effort for Syria and Iraq

Davutoglu also said that the new motion, ratified by the parliament, provides the government with the ability to take measures against any possible threat.

The motion, ratified by Parliament on Thursday  authorizes the government to deploy troops to Syria and Iraq to fight any group threatening the country, Davutoglu said: “These were already existing motions, we just made them suitable for today’s situation.”

The motion, submitted by Prime Minister Ahmet Davutoglu's cabinet, received support from 298 members of the 550-seat Parliament, with 98 voting against. The ruling Justice and Development Party holds an overwhelming majority of 312 seats.

Turkey's parliamentary motion is not limited to battling ISIL. It includes a range of threats to Turkey’s national security and was combined with another motion on the eventual deployment of Turkish forces in northern Iraq to fight the outlawed Kurdistan Workers' Party, or PKK, which is listed as a terrorist group by Turkey, the U.S. and the European Union. That measure allows military incursions into Syria and Iraq against any threat to Turkey, and allows foreign forces to use Turkish territory for possible operations against ISIL.

Davutoglu said: “We cannot leave the fate of our friend and brother countries, Syria and Iraq, to the international coalition’s decision-making process, in which we do not participate.”

A U.S.-led aerial campaign was launched against ISIL targets in Iraq on August 9, with the support of France, the U.K. and Belgium, along with Arab allies Saudi Arabia and the United Arab Emirates.