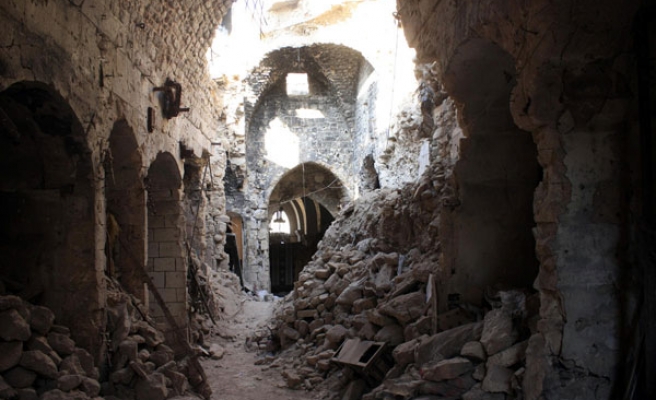 Turkish Prime Minister Ahmet Davutoglu expressed deep concern on Wednesday for the Syrian city Aleppo, which has been battered by Assad regime bombing.

"The world is just watching this atrocity as it did when Damascus and Hama came under bombardment," he told a press briefing at Ankara's Esenboga Airport.

Davutoglu stated that Ankara is "sensitive" to Aleppo's situation "with good reason." He recalled the city's once leading position as the largest commercial center in Syria, the center of the country's economy.

Syria's most populous city remains besieged on one side by the regime of Bashar al-Assad and by ISIL militants on the other. Opposition faction Free Syrian Army controls some key neighborhoods.

The Turkish premier maintained that the scene of a ruined Aleppo is not one that resulted from street clashes between minor groups, but the result of the Assad regime's airstrikes.

Earlier today, Davutoglu met with the prime minister of the Syrian National Coalition, Ahmet Toumah, to discuss the latest developments in the country.

He was not very hopeful of results from the "limited truce proposal" as drawn up by the UN Special Envoy on Syria Steffan de Mistura to halt the ongoing violence in Aleppo and other Syrian provinces.

"We have never known the regime to comply with any of the previous cease-fires," Davutoglu said.

"Cease-fires and limits to ongoing violence provide a temporary solution, but not a permanent resolution of the crisis," the president of the Syrian National Council Hadi al-Bahra told the British daily The Guardian on Tuesday.

Davutoglu said: "This confirms Turkey's argument for a safe haven and no-fly zone in Syria."

Ankara has strongly supported the proposal for a “safe haven” for refugees inside Syria near the Turkish border, as well as for the establishment of a no-fly zone above the country, with the UN and the international community.

Amid relentless fighting, regime bombardments and ISIL attacks concentrated in the northern parts of the country, an estimated 1.5 million Syrian refugees, including some 190,000 from Syria's border town Kobani, have sought shelter in camps across Turkey.

G-20 Summit to be followed by Davutoglu's visit to Philippines

Turkey is set to take over the 2015 term of the G-20 presidency on Dec.1,  after the Australia summit at which the Turkish prime minister is expected to hold bilateral talks with other G-20 leaders on the sidelines of the summit.

According to an earlier statement from the Prime Ministry, the upcoming G-20 summit will discuss efforts towards sustainable economic growth.

Davutoglu will also move on to Philippines to pay an official visit on Nov. 17 and 18 as a guest of the Manila government.

The visit will mark the 65th anniversary of diplomatic relations between the two nations, with the first visit from a Turkish prime minister to the Southeast Asian nation.