Turkey's Erdogan seeks increase in trade with US 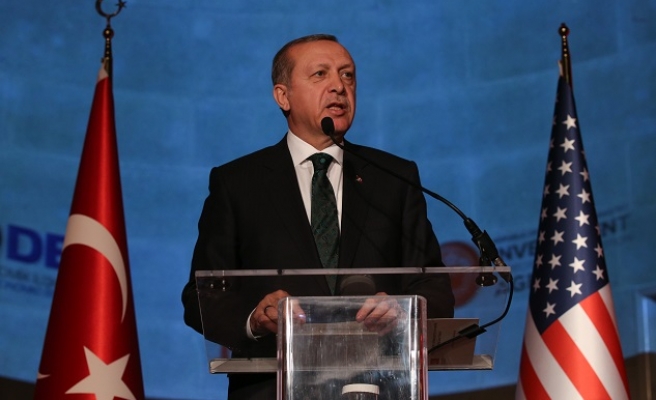 The comments by the Turkish president came during a dinner in the U.S. capital that was attended by dozens of Turkish and American companies.

The Turkish leader said his country wants the level of economic relations between the U.S. and Turkey to be on par with political relations of the NATO allies.

“It is not possible to say that we have fully realized the potential economic and commercial cooperation between the two countries,” Erdogan said.

“We have great expectations from you well esteemed representatives of prominent American companies as well as Turkish entrepreneurs, to recover this shortfall.”

Trade between Turkey and the U.S. hit $17.5 billion in 2015 while $150 billion moved between Ankara and Europe during the same period, according to Erdogan.

“I am inviting you from this platform to invest more in Turkey,” he said, noting Turkish entrepreneurs' concerns about investing in the U.S. that are related to legislative differences, competitive environment and geographical distance.

“I am calling on our entrepreneurs, think big, make firm plans for the middle and long run, establish partnerships with local firms and expand your commercial network to this side of the ocean,” he said.

“Turkey will undoubtedly stand with you.” Noting economic opportunities in Turkey, Erdogan said American investors also have concerns about investing in the country.

“So far there is no businessman who regret investing in Turkey, has been exposed to unlawful policies or had difficulties in using his commercial earnings in Turkey,” Erdogan said.

“It is a reality that there are some problems in our region and that they have some adverse effects but this will never stop Turkey from its way toward its goals.”

The Turkish president also stressed that his government would not allow terrorism to damage democracy and public order  – an apparent reference to recent attacks, including by the outlawed PKK terrorist organization in southeastern Turkey.