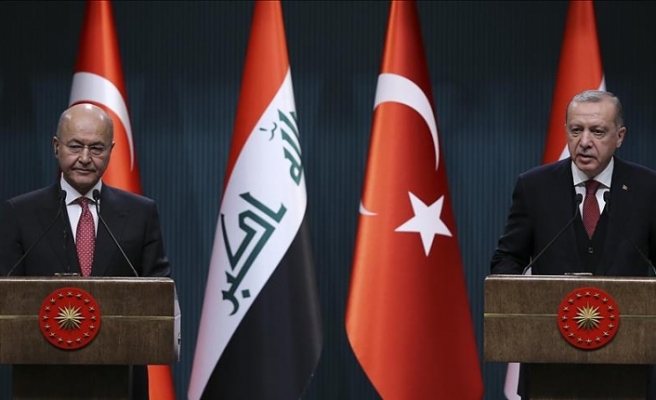 Securing Iraq's political unity and territorial integrity as well as ensuring its stability and security are the basis of Turkey's policy on Iraq, the Turkish president said on Thursday.

Speaking at a joint press conference with his Iraqi counterpart Barham Salih in Ankara, Recep Tayyip Erdogan said Iraq standing on its own two feet is very important for regional security and stability.

Erdogan said terror groups like Daesh, the PKK, and the Fetullah Terrorist Organization (FETO) pose threats to both Turkey and Iraq, and the two countries should cooperate in fighting terror.

He said Iraq had triumphed in its fight with Daesh, but at a heavy cost, as thousands of Iraqis were martyred and Daesh razed culture and civilization to the ground.

"We are ready to contribute to infrastructure and development projects in Iraq -- reconstruction of places harmed by conflicts being the priority," Erdogan said.

Turkey wants to boost security cooperation with Iraq, Erdogan said, adding: "There's a lot we can do with Iraq in the defense industry."

He said Turkey’s biggest expectation from the new Iraqi government is ensuring the welfare and well-being of all Iraqis.

Erdogan said in 2013 Turkey and Iraq hit a bilateral trade volume of $16 billion, a record level, but they could reach that level again and even get as high as $20 billion.

He added that this year Turkey and Iraq will continue holding High-Level Strategic Council meetings.

Iraq's Barham Salih, for his part, said his country is about to "enter a new phase."

He said reconstruction will make Iraq a strong country in the region again and that he was visiting “brother” nation Turkey "with the aim of cooperation in every field."

Iraq expects Turkey's help in reconstructing regions of the country free of the grip of terrorists, he said.

"I am visiting brotherly country Turkey with the aim of cooperation in every field,” Salih said, adding that relations with Turkey will be "shoulder to shoulder, in full solidarity."

He also said it is important for the Syrian people to choose their fate of their own free will, adding: "Turkey's and Iraq's roles play a big part in a solution."