Jailed PKK leader Abdullah Ocalan has invited on his followers to attend a conference on disarmament, a crucial step in Turkey's drive to end a 30-year insurgency with Kurdish militants, in the forthcoming spring. 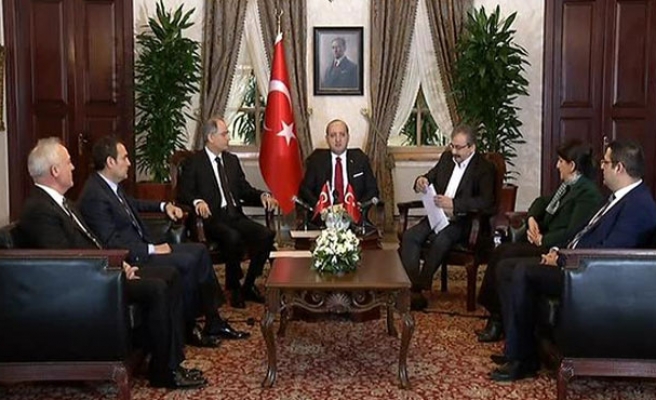 Turkey's pro Kurdish the Peoples' Democratic Party (HDP) has called on militant group PKK to lay down their arms on Saturday after a meeting with Deputy Prime Minister Yalcin Akdogan.

The meeting held at the Prime Minister's Office in Istanbul with HDP Vice Chair Idris Baluken and Istanbul Deputy Sirri Sureyya Onder, over the reconciliation process between Ankara and Kurds.

Onder, after the meeting, made a statement calling PKK militants to disarm and support political reconciliation process. Both sides emphasized the importance of ceasefire and said that Turkey is closer to peace than ever.

According to the statement, jailed PKK leader Abdullah Ocalan has invited on his followers to attend a conference on disarmament, a crucial step in Turkey's drive to end a 30-year insurgency with Kurdish militants, in the forthcoming spring.

Turkey is determined to conclude the solution process, refering to the efforts launched in 2013 to end the decades-old conflict with the outlawed PKK, with full support of the Turkish people, Deputy Prime Minister Yalcin Akdogan said.

“Laying down arms will further develop democracy,” he added.

About the government’s resolve to pursue the solution process, which was launched in 2013 to end the decades-old conflict with the proscribed PKK group in Turkey's eastern and south-eastern regions, Akdogan said, “We are determined to conclude this (solution) process with full support of the public.”

The deputy premier also underlined that Turkey was at a very important phase in the ongoing process.

A delegation of the HDP also went to Imrali Island Friday to speak with the imprisoned PKK leader, Abdullah Ocalan.

"The invitation is a historic declaration of intention to resolve the issue through democratic means instead of an armed struggle," he said.

He said that their main target was to democratically and permanently resolve the 30-year conflict.

"We call on all pro-democracy fronts and peace supporters to back the democratic debate about the solution process in Turkey," he added.

"With today's events a critical point has been reached in Turkey's democratisation, the expansion of freedoms and for lasting peace," said HDP chairman Selahattin Demirtas, whose deputies have shuttled from Ocalan's island prison near Istanbul to Qandil mountain in northern Iraq, where the PKK is based.

The disarmament congress would be held after consensus on the measures outlined in the statement is reached, Demirtas said. It was not clear who would attend the conference or whether PKK forces outside of Turkey would be expected to lay down arms.

Before the announcement, the HDP ensured 10 points for the congress:

1) The content of democratic politics is to be discussed

3) The legal guarantees of free and democratic citizenship

5) The socio-economic dimensions of the solution process

7) How can women, culture, and ecological issues be secured?

10) A new constitution that will internalise all the above democratic factors.

The statement shows renewed efforts by the government and Kurds, who have sparred in parliament this month over a domestic security bill. Talks with Ocalan began in late 2012 to end a conflict that has killed more than 40,000 people, mostly Kurds, since 1984.