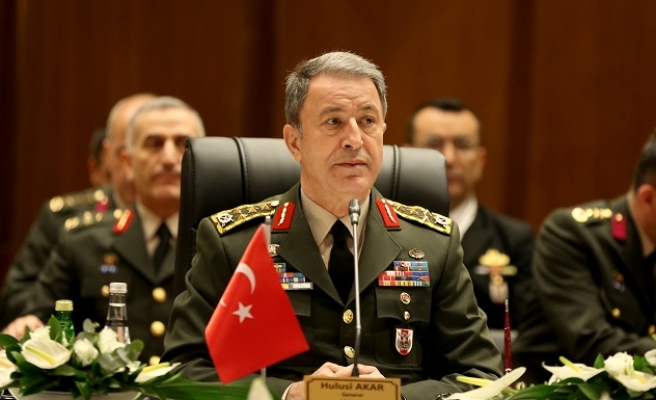 Images from the recaptured Syrian city of Raqqah once again demonstrate that the Syria-based PKK/PYD and the PKK are “arms of the same structure”, Turkey’s military chief has said.

Gen. Hulusi Akar, chief of the Turkish General Staff, told a conference in the U.S. that pictures released after Daesh was driven from the city by the SDF, of which the PKK/PYD is a major component, demonstrated ties to the PKK.

While the PKK/PYD, also known as the YPG, is allied to the U.S. in the fight against Daesh in Syria, the U.S., as well as Turkey and the EU, has designated the PKK a terrorist organization.

The PKK has fought a 33-year war against Turkey that has resulted in tens of thousands of deaths.

“It was stressed that images that emerged after the Raqqah operation and similar examples confirmed once again the fact that the PYD/YPG and PKK are arms of the same structure,” the General Staff said on Wednesday.

The two-day conference in Virginia, which was hosted by the Chairman of the U.S. Joint Chiefs of Staff Gen. Joseph F. Dunford, saw more than 70 military leaders discuss global counter-terrorism efforts, current threats and alliances.

Akar focused on Turkey’s multifaceted counter-terrorism efforts, particularly against the PKK, PKK/PYD and Daesh on its southern border.

He highlighted the regional threat from these terror groups, according to the statement, as well as Turkey’s contribution to regional peace.

Turkey has repeatedly objected to U.S. support for the PKK/PYD as a “reliable ally” in Syria, support which has included supplying arms and equipment.