Central Bank Governor Erdem Basci appeared to dismiss any suggestion that he might resign, saying that public duty should be performed for the full period in which it is assigned 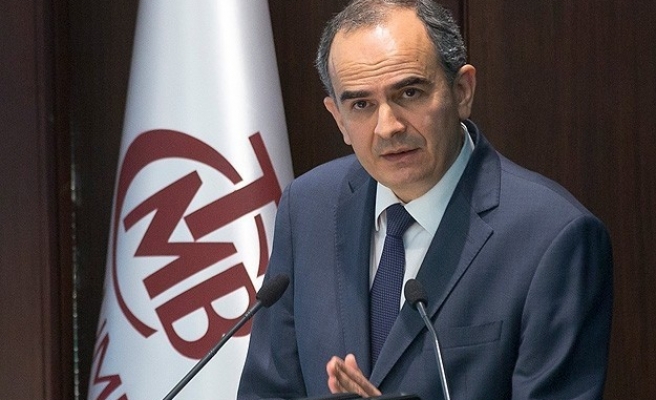 Turkish Central Bank Governor Erdem Basci sought to calm jittery investors on Friday, appearing to dismiss rumours that he would resign and giving a brief lift to the lira currency after it tumbled to a record low.

Basci's future, and the independence of the central bank, have been a concern for investors, particularly since President Tayyip Erdogan's criticism of the bank this week after it failed to meet his demand for bigger rate cuts.

In a sign of the pressure Basci faces, Economy Minister Nihat Zeybekci was quoted as saying on Friday that the main interest rate should be cut to 6 percent from 7.5 percent as borrowing costs were "not tolerable".

But Basci told reporters his absence from work on Thursday was due to a health check-up that did not reveal any serious problems, and was not a sign of an imminent departure, as some market participants had feared.

"A public duty is performed for the period it is assigned and it is performed in the best way. As our health allows, we will continue to fulfil the requirements of this duty," he said in comments broadcast by CNN Turk.

That helped the lira recoup some losses after hitting a record low of 2.517. However, the recovery was short-lived and the currency was at a new record low of 2.524 by 1218 GMT as investors focused on a speech by Erdogan at a lunch for provincial governors.

Speaking at a lunch for provincial governors on Friday, Erdogan did not mention the bank's latest rate decision but repeated his view that high interest rates amounted to a betrayal of the nation.

"Selling out the country would be to waste its resources through mismanagement, high interest rates and high inflation," he said in a speech ostensibly about Syria and a Kurdish peace process, but in which he listed various forms of betrayal.

"Serving the country means lowering inflation and interest rates to allocate that resource to investments for the country and people," he said.

Erdogan said on Wednesday that the bank's monetary policy was "unsuited to the realities of the Turkish economy" after it failed to meet his demands for rate cuts larger than those it made on Tuesday. He questioned whether the bank was under external influence.

The main share index fell 1.5 percent on Friday, while the yield on the benchmark 10-year government bond rose to 8.56 percent from a spot close of 8.21 percent on Thursday.

Traders viewed Erdogan's questioning of whether the bank was under external influence as a thinly veiled reference to U.S.-based cleric Fethullah Gulen, a former ally whom Erdogan accuses of infiltrating state institutions in a bid to unseat him. In the past year, Gulen followers have been systematically purged from bodies including the police and judiciary.

Erdogan's criticism has also triggered speculation about the future of respected Deputy Prime Minister Ali Babacan, an anchor of investor confidence in Turkey for more than a decade.

Babacan, who is in charge of the economy and has been a staunch defender of central bank independence, met Prime Minister Ahmet Davutoglu for more than two hours following Erdogan's comments, which rattled financial markets.

Erdogan's tirades against the central bank may be stoking turmoil in Turkish financial markets, but they are winning praise from a class of industrialists who have thrived over the past decade and see him as a pillar of their success.

Ahmet Hasyuncu has turned his humble family cotton mill in Kayseri, a city in the conservative Anatolian heartlands, into a multi-million dollar textile exporter over the past decade, thanks largely, he says, to cheap loans and political stability.

Here and in neighbouring cities, dubbed "Anatolian Tigers" for their entrepreneurial zeal and strong growth rates, loyalty to Erdogan runs deep. He is widely held as Turkey's greatest modern leader, delivering hospitals and schools and ending an era of unstable coalition governments.

"Without the economic policies of last ten years, without the political stability, and the credibility that allows banks to offer cheap loans to Turkey, this growth, these investments would have been unthinkable," said Hasyuncu, 63.

"If Mr Tayyip is crying out loud everyday to get interest rates cut, it is for us. It is to keep the investments going," he said in his office in Kayseri's industrial zone, home to more than 900 small and medium-sized manufacturers.

It is a very different view seen from the trading floors of Istanbul.

But with a parliamentary election in June, and Erdogan keen for the AK Party he co-founded to win the bigger majority it needs to boost his presidential powers, he looks unlikely to change a stance championed by his loyal supporters.

"Other than Germany, there's no country in Europe I look up to anymore. Our roads, facilities, plants, all are better ... This has all happened thanks to AK Party policies," said Aydin Murat Yakici, general manager of the Hascelik steel producer.

"The biggest driver of growth has been cheap money. It is not possible for us industrialists and investors to grow without loans."

Erdogan has accused an "interest rate lobby" of speculators of pushing for higher rates, casting them as growing rich on interest at the expense of hard working industrialists, the real bedrock of Turkey's economic success.

It is a narrative that has helped him win elections.

"Ten years ago, companies like us were snubbed by foreign investors. We couldn't find money for Libor plus 4.5 pct. When our banks managed to put together $50 million syndication loans, they were celebrating," Hasyuncu said.

"I like Mr Tayyip's determination. He stands tall. He pressed on with investments and today we have companies the Arab world and Europe admire. No-one can afford to snub us anymore."

Turkey has seen strong economic growth since the AK Party came to power in 2002, averaging 7 percent until the global financial crisis of 2008. Growth this year is forecast by the government at four percent.

In Kayseri, the number of firms in the "Organised Industrial Zone", where investment is rewarded with state subsidies, has more than tripled in the last decade, while the city's exports have risen to around $2 billion a year from $600 million.

The central bank cut all of its main interest rates on Tuesday despite inflation running at above its target, but Erdogan and government officials loyal to him dismissed the move once again as not enough.

"Look around you, all of this infrastructure, all these roads, hospitals, these were possible because we were able to borrow at a much lower cost," said Mahmut Hicyilmaz, head of Kayseri Chamber of Commerce.

"How could I keep investing with current interest rates?"