Turkish fishermen hear the call of the sea

Twenty-thousand Turkish vessels will set sail on Monday as the country's fishing season starts in earnest. 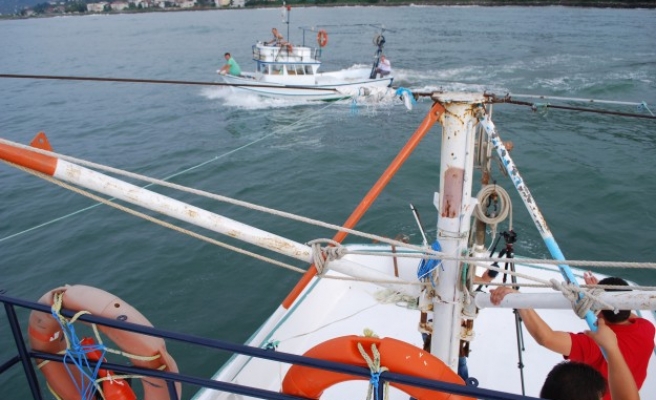 Monday marks the start of the commercial fishing season in Istanbul as thousands of ships set sail for the Bosphorus Strait, the Sea of Marmara and the Black Sea. However, one question persists – why do Turks not produce and consume fish in the volume expected of a country hemmed in on three sides by water?

Almost 20,000 registered fish boats will cast off on Monday. The Turkish phrase for this event is "Vira Bismillah" – literally ‘raising the anchor in the name of God’.

There is an unusual calm over Kumkapi, home of Istanbul's biggest fish market, which is almost empty except for a few trucks unloading line-fishing products; anglers and small-boat fishermen are allowed to start the season earlier than commercial vessels.

But the sleepy market will be teeming with activity when the season starts.

One icehouse keeper, who has worked there for some 25 years, told AA he expects to see the 20-ton capacity store full with larger fish than usual.

Another veteran, Mehmet Reis – "Captain Mehmet" – an experienced sailor with a deeply-lined face who has spent more than a third of his life fishing, claims Turkish people do not have enough appreciation for fish.

"We do not know how to eat fish and fish is not promoted enough," 59-year-old Mehmet tells AA from his small-size boat while cleaning the "most tasty fish in the world", just a small part of last night’s catch.

"This is medicine, do not call this ‘fish’," he says brandishing a horse mackerel – locally known as ‘istavrit’, the fish taking its name from the city of Istanbul.

Mehmet Reis' assertion is confirmed by the Turkish Seafood Promotion Committee; according to 2012 numbers, Turks consume only 8 kg in a year while people in Japan eat ten times more fish.

Fish-averse Turks are not the old fisherman's only problems; overfishing by some big boats will make Turkish seas "extinct for future generations".

"Those boats catch in a night double what I catch in a year," says the captain, complaining about unfair regulations which, according to him, are made for big bosses who lobby in their own interest.

However, many big boats have their own problem: finding a crew.

Captain Mehmet says the new generation is reluctant to work at sea as it isolates people from their social life although, for him, it means freedom.

Nevertheless, many young mariners from Black Sea coastal cities leave their homes and coffee houses, where they sit without work for months and immigrate to large Turkish cities to make up fishing crews. They are in demand and come with a price: 5,000 to 10,000 ($2,300 – 4,600) lira for a kind of transfer fee called "polatka".

Some media reports claim this can reach as high as 20,000 lira; there can be little doubt that this annual migration of labor is an unexpectedly high number for a city with an 11 percent unemployment rate.

One vessel captain, Orhan Reis, who works with a 30-man crew, did not want to comment about the ‘polatka’ fee, claiming that sea hands did not receive a set wage but a share of the boat’s profits.

Despite the problems at sea and on land, businessmen and traders are successful as Turkish fishery exports increased more than 20 percent annually in the last two years, according to the Turkish Exporters’ Assembly.

Turkey exported 102,000 tons of fish in 2013 and expects to see an annual rise this year, since it exports increased by 23 percent for the first seven months of 2014 compared to the same period last year.

Captain Mehmet and his two sons, who work at the helm with their father, live a reversed life with night shifts from 7 pm to 5 am. The trio will start with hopes of a fruitful catch on Monday. Despite the hard work Mehmet is convinced his life at sea is much better than being “boxed up in buildings and dealing with havoc on land”.