Video footage posted on the website of the ultra-nationalist Turkish Youth Union showed the attackers surrounding the sailors, calling them "murderers" and throwing orange paint at the men 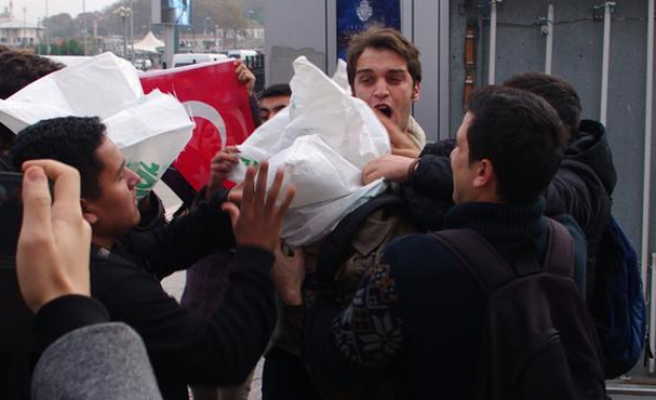 A group of Turkish ultra-nationalists attacked three U.S. sailors on a crowded street in Istanbul on Wednesday, shouting "Yankee go home" and trying to pull hoods over their heads in an assault condemned by the United States.

Video footage posted on the website of the ultra-nationalist Turkish Youth Union showed the attackers surrounding the sailors, calling them "murderers" and throwing orange paint at the men.

The attackers' actions were an apparent reference to an incident in Iraq in July 2003, when U.S. forces detained a Turkish special forces unit, leading its members away for interrogation with hoods over their heads.

"Because we define you as murderers, as killers, we want you to get out of our land," one of the attackers said in English, before the group chased the soldiers down a street lining the Bosphorus on the edge of Istanbul's historic peninsula.

The U.S. embassy described the video, apparently filmed by one of the gang, as "appalling" and condemned the attack.

"(We) have no doubt the vast majority of Turks would join us in rejecting an action that so disrespects Turkey's reputation for hospitality," it said in a statement on its Twitter account.

Colonel Steve Warren, a Pentagon spokesman, said it appeared to be a one-off incident carried "by some local thugs."

"We're working closely with Turkish authorities to have this investigated and to get to the bottom of exactly what happened," Warren said, condemning what he described as an "ugly, disturbing" attack.

Turkish Foreign Ministry has also condemned an assault on three U.S. sailors in Istanbul on Wednesday.

"Press reports indicate that some US officials visiting Istanbul were assaulted today, under the guise of a peaceful protest. We condemn this disrespectful act, which is in no way tolerable," said Turkish Foreign Ministry spokesman Tanju Bilgic late Wednesday.

Officials said the three sailors were unharmed and back aboard the U.S. Navy guided-missile destroyer, USS Ross. Shore leave had been cancelled for other U.S. sailors from the ship and the Ross was expected to leave Istanbul on Thursday.

Turkey has long been one of Washington's key allies in the Middle East and is a member of the NATO military alliance, but anti-American sentiment runs deep in parts of society, particularly since the 2003 U.S.-led invasion of Iraq.

A poll by the Pew Research group released at the end of October showed only 19 percent of Turks had a favourable view of the United States.