The Turkish navy is authorized to take action if necessary against Cypriot or Israeli vessels in the Mediterranean, the commander of Turkish navy said in a meeting 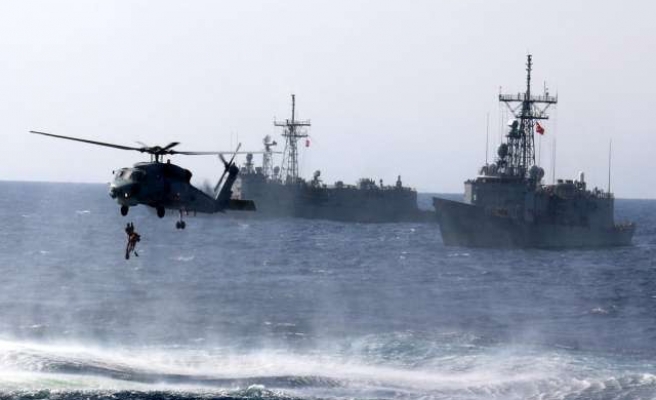 Turkey’s naval forces get a new set of rules of engagement to deal with increasing tensions over energy exploration in the eastern Mediterranean.

Speaking at a press conference Bostanoglu said that with the Eastern Mediterranean being a priority all activity in the area was being monitored closely.

He also said that while Operation Black Sea Harmony was being conducted in the Black Sea, the Mediterranean Operation was ongoing, noting that “During these national activities, the alliance responsiblities  within the scope of NATO's operation and are directly supporting their mission. A NATO permanent frigate task force with a Mine Counter Measure Task Force are continuing on a mission to prevent frigate piracy. The displaying of the Turkish flag international waters and Turkey's sea rights and advantages are currently being put in place”.

Tension in the South

Answering questins regarding tension in South Cyprus, he said that “ The Turkish Navy, is accompanying and protecting the Barbaros Hayrettin Pasa Research Ship. At the same time the sounding ship hired by  Southern Cypriot Greek government is following it at a distance of 900km. For this reason there is no abuse or discomfort”.

Saying that the pratice exercise has nothing to do with this current cause of tension, he said that the Blue While exercise is one that is done every two years, and that preparations are made two years in advance.

He also said that the practise exercise in the Eastern Mediterranean has nothing to do with the current activity and that was to strengthen relations between the alliances, in particular the submarine defence operations”.

When asked what rules of engagement would apply if Israeli warships and Green warships come head to head in the Eastern Mediterranean, Bostanoglu said that:

“We will act according to the rules of engagement directed to us. These rules are given by the Prime  Ministers Chief of Staff who have transferred the rules to the General Staff of the Navy. If there is anything that we are to deal with we will deal with it according to these rules.  Our elements in the navy are continuing to pursue their situational awareness in the region”.

Turkey strongly objects to the attempts by the Greek Cypriot administration in exploitation of oil reserves in the waters around the island.

The dispute grew worse in early October and led to the suspension of peace talks in the divided island. Turkey sent an oil-and-gas exploration vessel with two navy ships to the waters off the southern coast of Cyprus, an area which the Greek Cypriot administration claims as an exclusive economic zone.

"The Turkish Naval Forces protect and provide support to the Barbaros Hayrettin Paşa Research Vessel," Bostanoglu said in a press meeting about naval maneuvers in the Mediterranean.

Egyptian, Greek and Greek Cypriot administration officials called on Turkey to stop its exploration "within the maritime boundaries of Cyprus," on Saturday, following a joint cooperation meeting in Cairo.

Turkish authorities say that the Greek Cypriot administration's search efforts violate the rights of Turkish Cypriots in the divided island.

The last round of peace talks between Turkish and Greek Cypriots resumed after a two-year pause in February 2013, but were broken off due to the dispute about hydrocarbon exploration.