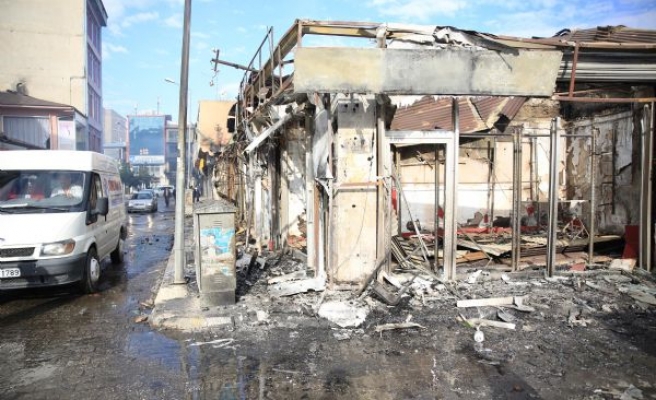 The head of Turkey's opposition called for calm after demonstrations rocked cities around the country.

The protests, which started Monday evening, were in support of the presence of the outlawed Kurdistan Workers’ Party, or PKK, in the Syrian town of Kobani.

Calling on the government to review its foreign policy, Kilicdaroglu said: "Turkey is a big country; we can overcome our problems."

The Leftist People's Democratic Party -- an opposition coalition which has absorbed the Pro-Kurdish Peace and Democracy party --  has encouraged street protests that support the Kurdistan Workers' Party in Kobani. "This is unreasonable, is an invitation for terrorism and violence in Turkey," Turkish Deputy PM Numan Kurtulmus said Wednesday.

In remarks to press during an official visit in Macedonia, Kurtulmus said "Nobody has the right to disturb the peace and stability in Turkey using developments in a foreign territory as a pretext."

"Many people died at these incidents (the protests across the country). Those who pushed Turkey into such chaos, what problem do they plan to solve with that method?" Kurtulmus added.

Also condemning the demonstrations, Turkey's Parliamentary Speaker Cemil Cicek said: "This is an example of irresponsibility by some Turkish politicians who provoked the aggressive demonstrations. These demonstrations turned into terror attacks rather than supporting a cause in a democratic way. It is a grievous mistake to disturb the peace and tranquility in the country and to bring these clashes to the interior," said Cicek.

Sixteen people have died and at least 36 have been injured in the demonstrations across Turkey which started on Monday. Clashes between protesters and the security forces broke out in a number of major Turkish cities, including Istanbul and the capital, Ankara.

ISIL launched an offensive in mid-September, capturing many villages surrounding the northern Syrian city of Kobani from Kurdish fighters, who are grouped into "People's Protection Units," or armed units of the Democratic Union Party, PKK's offshoot in Syria.

Turkish officials have said the country is against supporting armed groups of the PKK-offshoot Democratic Union Party, in Kobani with military and financial aid, even though they are fighting against ISIL.

The PKK is listed as a terrorist organization by Turkey as well as by the U.S. and the European Union.