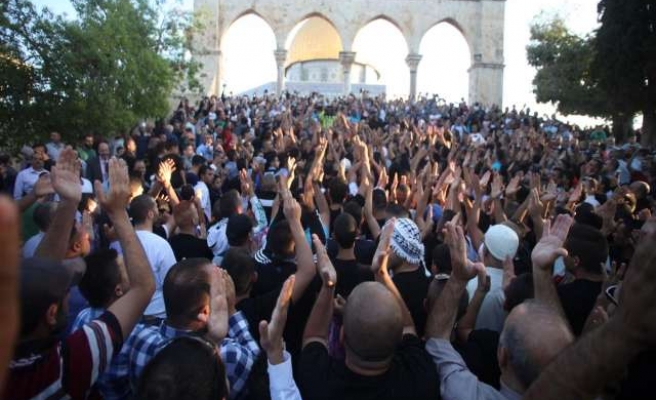 Turkish Prime Minister Ahmet Davutoglu has said Turkey holds most sacred the Al-Aqsa Mosque in Jerusalem just as Kaaba in Mecca, describing the protection of the both holy sites a "divine duty."

Davutoglu's remarks came as Al-Aqsa complex that represents the world's third holiest site for Muslims was stormed Wednesday by a group of a number of Jewish settlers and Israeli security forces, who stepped in the mosque with their boots on, knocked around Palestinians protesting their presence and threw around the Qurans.

"Even if a tiny piece of stone was taken from Al-Aqsa, it will be replaced, rebuilt and revived by our hands," he told the inauguration ceremony of a new metro line in Istanbul on Sunday.

Davutoglu said "we are the servants of the soil of Quds," using the Arabic name of Jerusalem, pledging to protect the holy city and Al-Aqsa -- the first direction of praying for Muslim worshippers -- against any attempt to destroy them.

Jews refer to the holy compound as the Temple Mount, deeming it to be the site of two Jewish temples in ancient times.

After Israeli raid Wednesday, Davutoglu harshly condemned the Israeli offensive on Al-Aqsa Mosque, calling it "nothing but barbarity to the core."

"We will defend the cause before the United Nations at a Quds contact group meeting as well as all world platforms," he added.

Meanwhile, Turkish President Recep Tayyip Erdogan also confirmed to Palestinian leaders that Turkey will start an initiative at the UN Security Council to stop the Israeli aggression in the holy compound.

"Ending the attacks by Israeli troops and Jewish settlers in Al-Aqsa Mosque compound is of the utmost importance for regional peace," he said in phone call with Palestinian President Mahmoud Abbas and Hamas leader Khaled Mashaal on Wednesday night.