Erdogan says Muslim world should unite to put an end to the crises in Middle East. 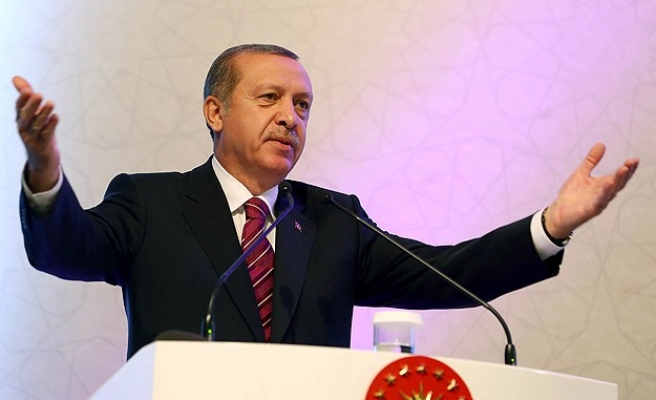 Turkish President Recep Tayyip Erdogan called on Thursday for Muslim countries to unite against the crisis unfolding in the Middle East.

“The only condition to overcome the crisis in the Islamic world is unity, solidarity and alliance. Believe me, we can resolve every problem as long as we are united,” Erdogan told listeners at an Istanbul summit on Islamic economic cooperation.

Erdogan was speaking at a ministerial meeting of the economic committee of the multi-national Organization of the Islamic Conference, COMCEC.

“Islamic countries, which have developed economically recently, have been experiencing the biggest humanitarian and political crisis in their history simultaneously,” the Turkish leader said.

“If we (as Muslims) act together, we will end the loneliness of Palestine which has continued for nearly one century... It is possible to end the bloodshed in Iraq and killing of Syrian children if we unite.”

Erdogan called on the Muslim world to take action over crises in Syria and Iraq, saying: “Please look at the picture and understand who wins and loses from these killings and clashes?”

The Turkish leader was particularly critical of the UN, saying: “While the United Nations stands idly by the bloodshed of children, the Organization of the Islamic Conference cannot stay quiet.”

“Has the United Nations found a solution to what has been happening (in Syria, Iraq) so far? Does the UN have justice?” he said. “You cannot expect justice from a body, which does not have justice at all.”

Erdogan also spoke of his recent remarks over the discovery of the American continent during the Latin American Muslim Leaders Religious Summit in Istanbul. He said that he was targeted by the western media because of his remarks.

“They are disturbed by us reminding of the historic truths, history of civilizations, science, politics and military.”

"Some 314 years before the discovery of Columbus, Muslim navigators reached the continent in 1178," Erdogan had said.

Erdogan also stressed importance of financial cooperation among Muslim countries, saying: “We should review our strategy... COMCEC should establish a real-estate stock market. It should also take a step to establishing a gold exchange.”

COMCEC was established in Mecca in 1981.

Describing itself as “the main multilateral economic and commercial cooperation platform of the Islamic world,” COMCEC convenes annually at a ministerial level in Istanbul under the chairmanship of the president of Turkey, "to address the common problems of the Muslim world.”