Ankara will not 'turn its back' on Palestinian cause or people, says President Erdogan in Istanbul 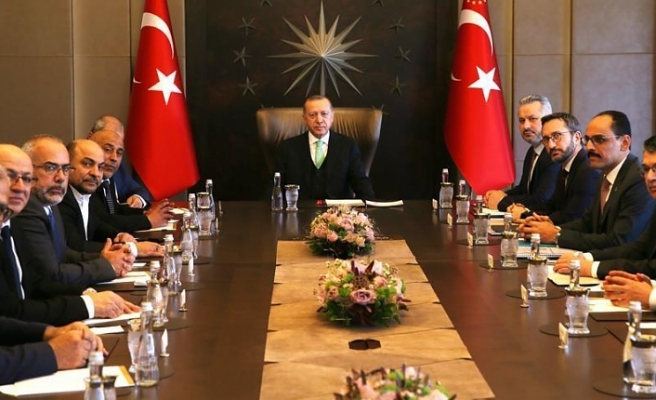 Turkey’s president on Saturday received Palestinian members of the Israeli parliament in Istanbul.

Erdogan underlined that Turkey will not “turn its back” on the Palestinian cause or people, adding that Ankara will share "all means available" for ending the occupation and establishing peace.

He went on to thank the Knesset members for their service of representing the Palestinian will in Israel’s legislative body against Tel Aviv’s “oppression” in Gaza as well as its "Jewish State" law and "baseless rhetoric" against Turkey.

The president further encouraged the group to work in unity and solidarity, saying that the controversial law defining Israel as a Jewish state was in open disregard of Palestinian citizen rights.

Among the representatives attending were Ahmad Tibi and Talab Abu Arar who had recited the Muslim call to prayer (adhan) in the Knesset in protest of a bill to limit the call across the country.

The meeting came at the heels of an announcement by Israeli Prime Minister Benjamin Netanyahu that Israel would not renew a mandate of the UN Temporary International Presence in Hebron (Khalil) first dispatched to the town in 1994.

The legislation also promotes Hebrew as the only official language, stripping Arabic as an official language while recognizing its "special status" in the country with a "united Jerusalem" as its capital.

The law risks further alienating the Arab minority who argue they already face discrimination from Israeli Jews and the government and already feel as though they are second-class citizens.

Palestinians, who have Israeli citizenship make up 21 percent of the population, are known as Israeli Arabs and have members in the Israeli parliament, the Knesset.