Turkish dailies reported Tuesday on Prime Minister Ahmet Davutoglu's visit to the Philippines, the meeting of Deputy PM Yalcin Akdogan with a pro-Kurdish delegation over the reconciliation process, and the retrieval of more bodies in the flooded Ermenek coal mine 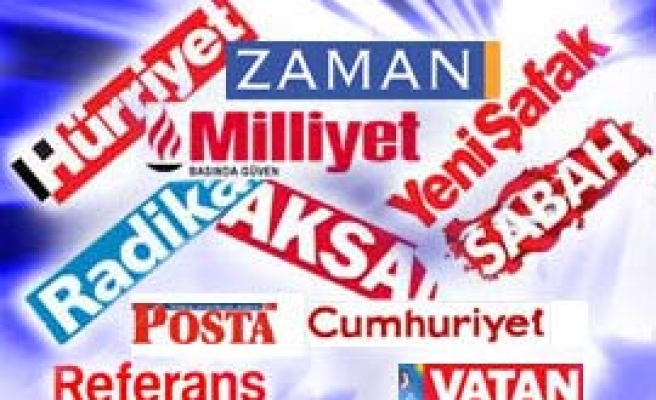 The majority of Turkish dailies reported Tuesday on Turkish Prime Minister Ahmet Davutoglu's visit to the Philippines, the meeting between Deputy PM Yalcin Akdogan anf a pro-Kurdish deleagation over the reconciliation process, and the retrieval of more bodies in the flooded Ermenek coal mine.

Daily MILLIYET headlines "Peace thanks from the Philippines," saying that foreign policy officials had thanked Davutoglu for Turkish efforts supporting an agreement.

During the visit, Davutoglu stated that Turkey had played an important role in negotiations with the Moro insurrection in the Philippines, reported the paper.

The secessionist Muslim movement had been fighting government forces for 40 years in the country's southern island of Mindanao until a peace agreement was reached in May 2014. Most of the country's Muslims live on the island, which nevertheless remains predominantly Christian.

"Multiculturalism is our richness," headlined daily STAR, quoting Davutoglu as saying "pluralism provides us with a cultural character and this becomes an important answer against radicalization. Turkey will always act shoulder to shoulder with the Philippines as it has done during the crisis in Syria in the Middle East."

Daily AKSAM reports on Davutoglu's visit of a school, where he was welcomed by the students, in the capital Manila. The restoration the school was backed by the Turkish Cooperation and Coordination Agency, or TIKA.

The Turkish aid agency namely equipped the school with computers and new desks, reports the paper.

The meeting between Turkish Deputy PM Yalcin Akdogan and a delegation from the pro-Kurdish Peoples' Democratic Party, or HDP, over the reconciliation process also garnered considerable coverage.

According to daily SABAH, Akdogan insisted that a suspension of activities and provocations were required for the reconciliation process to succeed.

The daily underlined that the government had laid its 'red lines' on the table, saying that Akdogan had stressed that "providing public order and inaction" were essential to the process.

The Turkish government’s solution process, which was launched last year, aims to secure an end to the decades-long conflict with the outlawed terrorist Kurdistan Workers' Party, or the PKK, which has claimed the lives of more than 40,000 people.

Daily TURKIYE headlines "Positive steps," saying that "a new page" has been turned in the reconciliation process - which was disrupted after the Kobani incidents, according to the daily.

Protests over Syrian town of Kobane that broke out in Turkey in early October caused the solution process talks to break down. The demonstrations were held to show solidarity with Kurdish-populated town of Kobani, which has been besieged by militants of the Islamic State of Iraq and the Levant.

The daily also states that the Peoples' Democratic Party request for broadening the Imrali committee  - a group who visit the Kurdish leader Ocalan imprisoned on Imrali Island in the Marmara Sea - was accepted by Akdogan.

He also agreed to create an independent committee, which is to supervise the process.

“Sixteen more eyes for reconciliation,” titles daily CUMHURIYET, referring to the new committee, which will include 16 people who will be tasked with monitoring the process objectively.

The new committee - one half appointed by the government and the other by the Peoples' Democratic Party - will consist of academics, writers and people with an NGO background.

Several dailies also covered the retrieval of the bodies of two of the 16 workers trapped in the flooded Ermenek coal mine in central Turkey.

Daily HURRIYET headlines "Two more corpses in Ermenek," saying that the dead bodies of two workers were found by the rescue team on the 21st day after the disaster.

A water pipe exploded and caused a flood on October 28, while 34 workers were inside the mine - located some 400 kilometers south of the capital, Ankara. A total of 18 miners had remained trapped since.