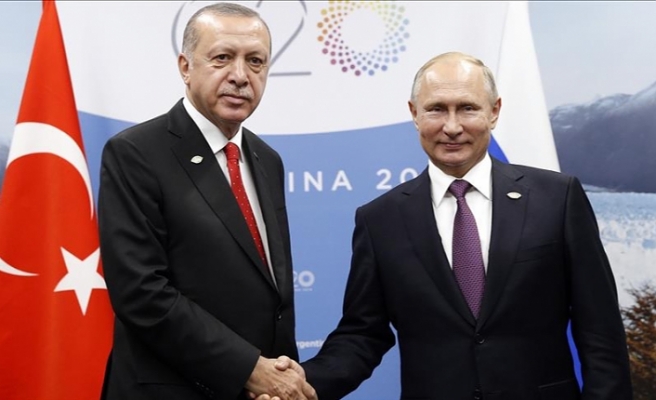 “Our talks regarding TurkStream are of great importance,” Erdogan said before his meeting with Putin.

The TurkStream project is an export gas pipeline set to cross beneath the Black Sea from Russia to Turkey and extend to Turkey's borders with neighboring countries.

Speaking about the four-nation Istanbul summit on Syria’s northwestern Idlib, he said there were more steps needed to be taken.

“I find it very appropriate to have a meeting about Idlib even if it’s for a short time,” Erdogan said.

On Oct. 27 Turkey hosted a four-nation summit, which was attended by the leaders of Turkey, Russia, France and Germany, who expressed their determination to end the bloodshed in war-torn Syria.

For his part, Putin hailed "significant progress" in cooperation with Turkey.  He also recalled a Nov. 19 meeting with Turkish President in Istanbul where they attended a ceremony commemorating the completion of sea section works for TurkStream natural gas project.

"After the Istanbul meeting we receive very good signals about this progress," he said, labeling the meeting as "an indicator of our fruitful cooperation".

Putin noted that the TurkStream natural gas pipeline project has a big contribution to ensuring the national economy and energy security.

Russian leader underlined that Turkey "once again" proved its independence in foreign policy.

Stressing on a "steady increase" in trade relations between Ankara and Moscow, Putin reiterated that Turkey is a "reliable partner" in global trade and cooperation.