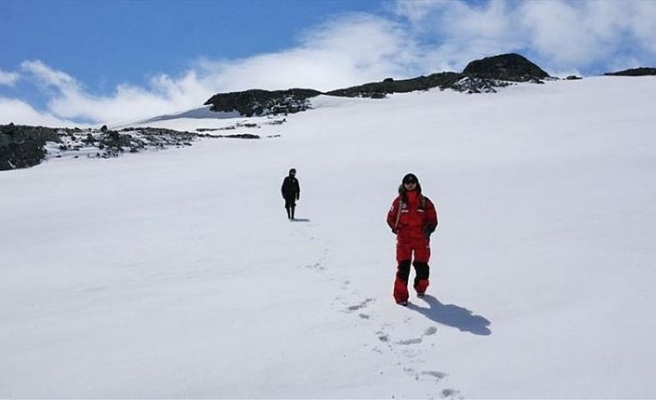 Materials in the frozen wastelands of Antarctica could advance our knowledge of the Martian landscape, according to a Turkish scientist who is collecting them.

Gunes and project coordinator Professor Nurgul Celik Balci have focused specifically on minerals with similar geochemical features to those found on the planet Mars.

“This study -- which involves geology, geochemistry, biology and climate sciences -- aims to understand the geochemical conditions on Mars and provide information about the occurrence of biological traces in the materials formed amid these conditions,” Gunes said.

According to the scientist, project participants face exceptionally harsh weather conditions in Antarctica.

While studying marine biology, oceanography and ecology at South Korea’s King Sejong Station, Gunes said she had the opportunity “to understand the need for scientific study in Antarctica through my discussions with other scientists from different disciplines”.

Turkey, she added, was ready to take its place in the field of space research, which, she asserted, “has become more important for our country, while earth sciences are also of great importance so as to investigate traces of life on other planets”.

The project, which is also supported by the Turkish Presidency, the Industry and Technology Ministry, and ITU’s Polar Research Center (along with other Turkish universities), will conduct a battery of scientific studies over the next 30 days.

A team of three Anadolu Agency journalists -- Dilara Zengin, Ozge Elif Kizil and Servet Ulku -- will cover the progress of the studies during a trip to Antarctica that began last October.

The Polar Research Center was established in Antarctica in 2015 with the aim of conducting research and raising Turkey's profile among the international scientific community.

In April 2016, the first-ever Turkish team of researchers -- including doctors, botanists, geologists and oceanographers from seven universities -- traveled to Antarctica to study the impact of “climate change”.

The coldest continent on earth, Antarctica has served as a scientific research zone since the signing of a 1959 treaty.

Turkey currently holds “observer” status at the Polar Research Center, but hopes to see this eventually upgraded to “consultative” status.