In the Lice district of Diyarbakir province, dozens of protesters hurled petrol bombs, fireworks and stones in response to the gendarmerie police intervention 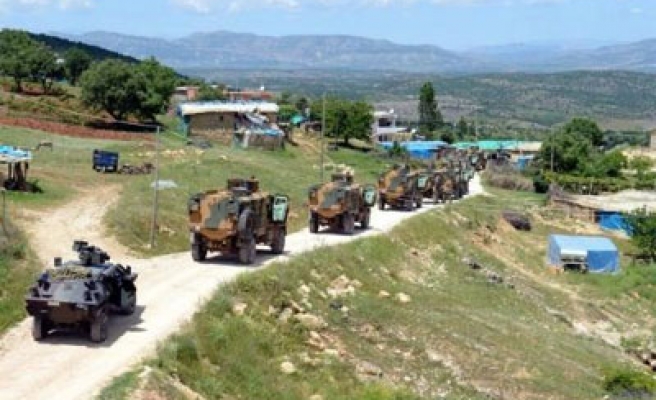 Turkish security forces fired tear gas and water cannon in dawn operations on Wednesday against Kurdish demonstrators blocking highways in southeast Turkey, in an effort to end protests which have spread across the region over the last 12 days.

The protests highlight the fragility of peace talks launched by PM Recep Tayyip Erdogan in 2012 with jailed Kurdish rebel leader Abdullah Ocalan that aim to end a 30-year-old insurgency which has killed an estimated 40,000 people.

In the Lice district of Diyarbakir province, dozens of protesters hurled petrol bombs, fireworks and stones in response to the gendarmerie police intervention, security sources said.

The protests, in which the youth wing of Ocalan's Kurdistan Workers Party (PKK) has played a prominent role, are aimed at halting the construction of military outposts to tighten security and have spread to other provinces in recent days.

In the province of Mus, helicopters set down soldiers and special forces teams to back up another early morning operation against some 1,000 demonstrators who clashed with security forces there.

Despite the unrest, the government and pro-Kurdish politicians said this week the peace talks were advancing. Ocalan himself said the process had reached a new stage.

The PKK is designated a terrorist group by Ankara, the United States and the European Union and Ocalan remains widely reviled among Turks.

A ceasefire called by Ocalan in March 2013 has largely held, but the PKK halted a rebel withdrawal to bases in northern Iraq last summer, complaining about the slow pace of negotiations. They have increased their activity in recent months with kidnappings and acts of sabotage.

There were no immediate indications that Wednesday's security operations had brought an end to the protests, in which the demonstrators have set up roadblocks and have dug trenches to close country roads between the provinces.

Security forces have periodically reopened the roads during the 12 days of protest, filling in the trenches, only for the demonstrators to dig them up again and resume their action.

There were also street clashes in the Silvan district of Diyarbakir and the Cizre district of Sirnak province near the borders with Syria and Iraq.

In Cizre, protesters wearing scarves to conceal their faces blocked a bridge on a main highway across Sirnak. Some of them, carrying PKK flags, halted vehicles and checked the identities of those inside.

Separately, police detained 20 people in dawn raids in the province of Siirt as part of an investigation into a PKK-related organisation, security sources said.

The PKK took up arms against Turkey in 1984 with the aim of carving out a separate state in the southeast for the country's Kurds. They subsequently moderated their demands, seeking increased political and cultural rights which were long denied.