The student protests were concentrated on the campuses of Diyarbakir's Dicle University and Siirt University, both located in the southeast of the country. 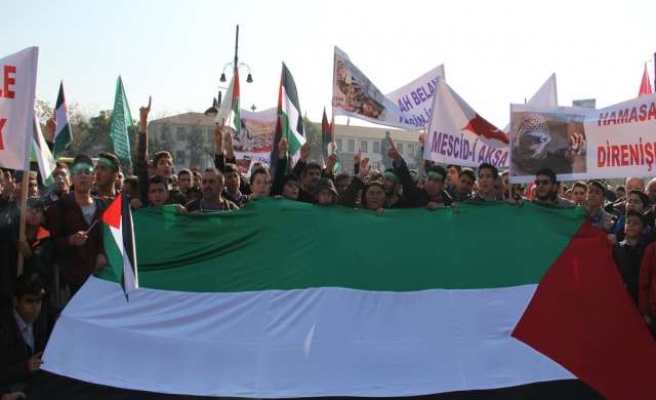 Turkish university students marched to condemn Israeli raids on Al-Aqsa mosque, with protests being held in different provinces of Turkey on Tuesday.

The student protests were concentrated on the campuses of Diyarbakir's Dicle University and Siirt University, both located in the southeast of the country.

They condemned the actions of Israeli soldiers, who attacked Al Aqsa Mosque -- the third holiest place in Islam after Mecca and Medina -- while still wearing their shoes, a sign of disrespect in Islamic culture.

Hadi Kilil, a student in Dicle University, said that nobody has witnessed such a cruel assault on Al-Aqsa Mosque since 1967.

"Israel took a hit in Gaza by Hamas and is trying to take revenge through such assaults on Islamic holy places," Kilil said in his speech on Tuesday.

Last July, Israel carried out its third major offensive, dubbed operation "Protective Edge," against the densely-populate Gaza Strip – which is home to some 1.8 million Palestinians – within the last six years.

He said that the path of independence for Muslims will only be obtained through freeing Al-Aqsa Mosque.

"Muslims unite when it comes to Al-Aqsa Mosque," Kilil added.

Other students gathered in the Kezer campus of Siirt University and shouted slogans against the recent actions of Israeli soldiers.

They held Palestinian flags and written posters condemning the raids.

"The closure of the holy mosque to Muslim prayers is a scandal," Muhammed Ata Abdilhadioglu, a student at Siirt university, said on Tuesday.

In different parts of Turkey, there have been many protests since Israel's raid started on Al-Aqsa.

Jews refer to the area as the "Temple Mount," claiming that it was the place of two Jewish temples in ancient times.