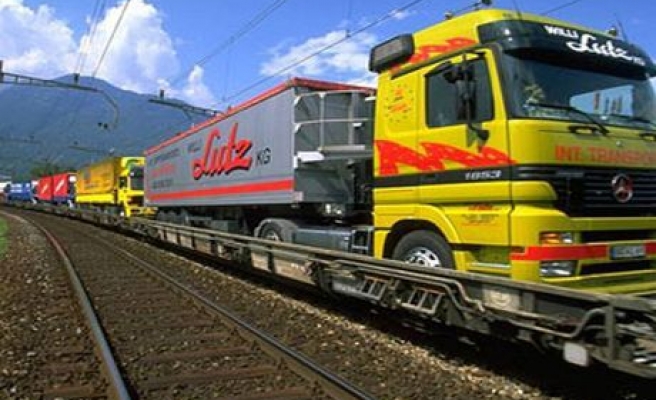 Although Turkmenistan has increased capacity at one of its customs gates to allow passage of 300 trucks, Iran is still not allowing more Turkish trucks to pass by, Turkey’s International Transporters' Association said Wednesday.

“Turkmenistan has increased its Luftaabad customs gate capacity after it received a request from Turkish President Recep Tayyip Erdogan,” head of the association Fatih Sener said.

Turkmenistan’s President Gurbanguli Berdimuhammedov had issued an order to this effect on Oct.7 during President Erdogan’s official visit to the country.

Ashgabat then increased its Luftabaad’s Customs Gate capacity from 200 trucks to 300 trucks.

However, despite the increased capacity, over a thousand Turkish trucks are still waiting at the Turkmenistan-Iran border because of Iranian officials giving privilege to its own Iranian export trucks, Sener said.

Iranian customs for transit of Turkish trucks are vital for Turkey’s exports to Central Asia.

"When we visited Iran customs border before Erdogan’s visit to Turkmenistan, only 45 Turkish trucks had permits to pass daily from the gate, although the border has the capacity of 200 trucks... Iranian officials told us we need to get permission from Turkmenistan to increase the volume. But when Turkmenistan increased this capacity to 300 trucks, Iran still did not allow us to use this increased capacity," Sener said.

"There is no other county in the world except Iran that discriminates against Turkey in such a way at the customs gate," he added.

The association head also revealed that nearly 800 Turkish trucks were still waiting at the Iran-Bazergan customs gate to enter Turkey.

On Monday, Iran's Ambassador to Turkey Ali Reza Bikdeli said the latest sticking point over truck transit fees was solved after negotiations between the two neighbors.

The deal came after Turkey retaliated with increasing transit fees for Iranian trucks when Iran hiked its own rates for Turkish trucks.

Bikdeli had said: "we accepted this request due to the insistence of our Turkish friends and their imposition of some taxes."

"Certain arrangements should be made within the next 10 days for anew system," he added.

According to Turkish officials, the trade between Turkey and Iran stood at $22 billion in 2012 before dipping to $14.5 billion in the following year due to economic sanctions imposed on Tehran.

The trade volume between the two countries stood at $3.2 billion in the first quarter, according to Turkey's official statistics office.