Daily life and traffic stops at 9:05 a.m. as sirens wail across country and people observe 2 two minutes of silence for Ataturk 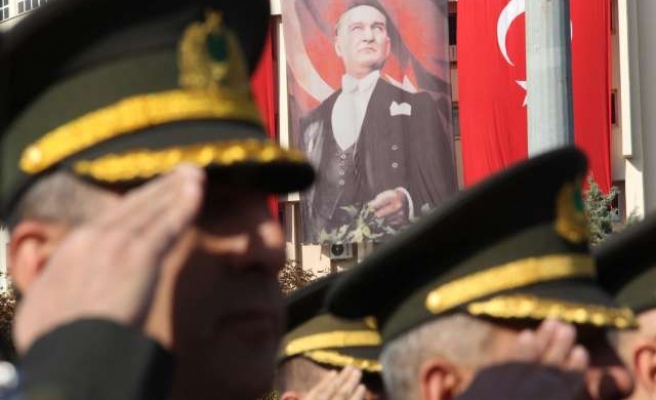 People across Turkey paused in their duties and stopped their cars in traffic Monday as they commemorated Mustafa Kemal Ataturk, the founder of the modern Republic of Turkey, who died 76 years ago.

Daily life stopped for two minutes, beginning at 9:05 a.m., the time of Ataturk's death. Sirens wailed throughout Turkey, and people observed two minutes of silence. Flags across the country are flying at half-mast.

Mustafa Kemal -- who was given the title Ataturk, father of the Turks -- founded modern Turkey from the ashes of the Ottoman Empire, which collapsed after World War I. The republic was founded in 1923.

Ataturk, the country's first president, modernized Turkey, promoted secularism, changed to the western alphabet, and reoriented the country toward the West.

Three-quarters of a century later, he remains a national hero, and one cannot walk far in Turkey before seeing his photo on banners, in store windows, and in offices, cars and homes.

Commemorations have begun in Turkey, in the Turkish Republic of Northern Cyprus, and in Turkey's embassies across the world.

The commemorations began Wednesday with a ceremony at the Anitkabir mausoleum, Ataturk's gravesite, in Ankara, the country's capital.

Virtually no Turkish politician can hope for success on a national level without paying homage to the country's founder.

Erdogan laid a wreath at Ataturk's mausoleum, then wrote these sentences in Ataturk's special memorial book:

"We are once again commemorating the father of our republic, our first president, Gazi Mustafa Kemal," he wrote. "We are closer than ever to achieving the goals of Gazi Mustafa Kemal and his friends. Turkey's steady growth in its economy, advanced democracy, peace and prosperity remain focused on these goals. We will continue to enlarge the heritage we have taken from him and our martyrs. Rest in peace."

After the ceremony, the Turkish Stars, a branch of the Turkish Air Forces, flew slowly over the masoleum, making the shape of a heart.

Ceremonies in Istanbul began at Dolmabahce Palace where Ataturk spent his last days and where he died.

After the sirens fell silent and the silence had been observed, the Turkish national anthem was sung. Then, following the official ceremony, the room where Ataturk passed away was opened to visitors.

A crowd had waited in front of the place since early in the morning. Visitors left white and red carnations on Ataturk’s bed, which is covered with a Turkish flag.

The official ceremony was projected on large screens for viewers outside.

At Istanbul’s busiest airport, which is named after Ataturk, workers came together in the departures area to stand in silence for one minute. Passengers joined them, as well.

In Istanbul’s Besiktas and Kadikoy districts, human chains were formed to commemorate Ataturk.

Ceremonies have taken place in Turkey's embassies in Azerbaijan, Kazakhstan and Turkmenistan, where the ambassadors placed wreaths on Ataturk memorials.

Born in 1881 in Thessaloniki, in what was then the Ottoman Empire, Ataturk made his military reputation in 1915 by leading forces that repelled the Allied invasion in Canakkale, known in the West as the Dardanelles.

Following the empire's dissolution after World War I, Ataturk led the Turkish War of Independence, defeating forces sent by European powers. During his presidency, he worked to transform the former Ottoman Empire into a modern and secular country.