Two leaders of Christianity pray for peace in Istanbul

Pope Francis and Fener Greek Patriarch Bartholomew I have prayed for the world peace on Saturday night in Istanbul. 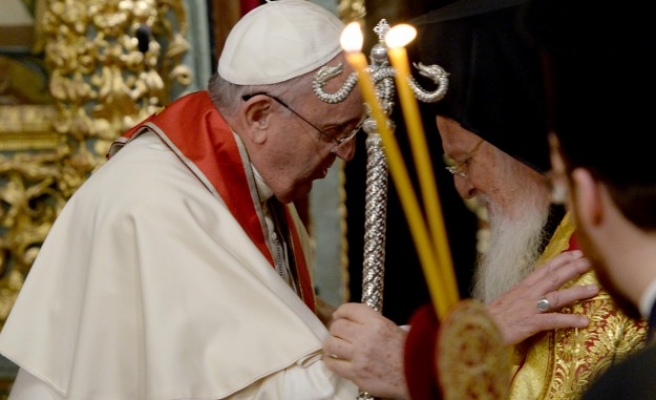 Pope Francis, the spiritual leader of the globe’s estimated one billion Catholics, and Fener Greek Patriarch Bartholomew I, the Istanbul-based leader of many of the world’s Orthodox Christians, have prayed for the world peace on Saturday night in Istanbul.

The 77-year old pope is Istanbul as part of his three-day visit in Turkey.

The two spiritual leaders followed the Doxology Service, a prayer for thanksgiving and peace. They also blessed the crowd in the Patriarchal Cathedral.

After the service, the two leaders had a private meeting for around 30-minutes.

Bartholomew presented Pope Francis with an icon of St. George painted on Mt. Athos. In return, Pope Francis offered to Bartholomew a facsimile copy of an eleventh-century Greek manuscript from the Vatican library and a copy of ninth-century mosaic of Christ from St. Peter's Basilica.

Bartholomew became the first Orthodox patriarch to attend Pope Francis’ inaugural mass last year, since the split between the churches.

The Catholic and Orthodox branches of Christianity split more than 1,000 years ago.

In Istanbul, the two Christian leaders are expected to sign a joint declaration on reuniting the churches on Sunday.

After his visit to Fener Greek Patriarch, the 77-year old pontiff went to Vatican representation office in Istanbul’s Harbiye neighborhood.