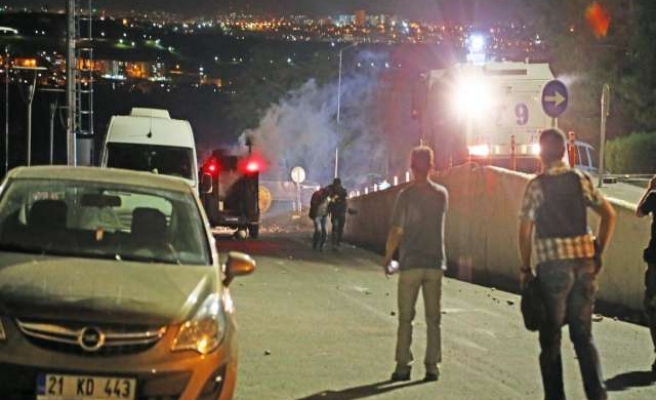 Two protesters died and two people including a soldier were wounded during an illegal protest in the southeastern Turkish province of Diyarbakir on Saturday.

Security forces intervened in the demonstration held by a group that attempted to block the road between Diyarbakir and Bingol provinces, hurling hand-made grenades and stones at servicemen.

The group was allegedly protesting the construction of a security post in Lice district, according to an AA correspondent in the city.

Unidentified assailants among the group opened fire, which security forces returned. Abdulbaki Akdemir, 50, died at the scene, and Ramazan Baran, 24, was pronounced dead at Lice district hospital where he had been taken.

Abdullah Akkulu, who was wounded during the incident, is in intensive care following a surgery, medics told Anadolu Agency. "The operation was successful. He is conscious," Dr. Sait Alan said.

Intermittent clashes have continued since late May in Lice.

Separately, a group of militants on Sunday raided a stone pit and set six trucks and four construction vehicles on fire in the southeastern province of Bingol, an AA correspondent reported from the region.

Security forces launched an operation to find the assailiants. The trucks were reportedly carrying stones to a dam construction site.

In another development, members of the PKK blocked traffic on a road linking two districts in the eastern province of Mus. Bulanik District Governor Omer Sahin said security forces were dispatched to the area.

Diyarbakir governor’s office said in a statement last week that PKK’s militants and affiliate groups since May 24 had engaged in kidnappings, roadblocks and attacked security forces with home-made explosives and firebombs.

On Saturday last week, a group of 50-60 men attempted to block the same Diyarbakir-Bingol road using heavy-duty vehicles that belonged to a local construction company.

The statement said the group acted "under the guise of public assembly," but produced long-range arms when confronted by security forces.

The governor's office said that the group tried to use civilians as human shields, shooting at servicemen in an attempt to force them to return fire.

The events come after the PKK reportedly kidnapped an unknown number of children on April 23, the national day for children, threatening to destabilize a delicate 'solution process' to end terrorism and address the issues of minorities, particularly those of the Kurdish minority which is by far the largest accounting for 18 percent of the population.

Families of some of the kidnapped children staged sit-ins in Diyarbakir where they were abducted, marking the first-ever public reaction to such kidnappings in the southeastern region. The protests received support from high-ranking government officials.