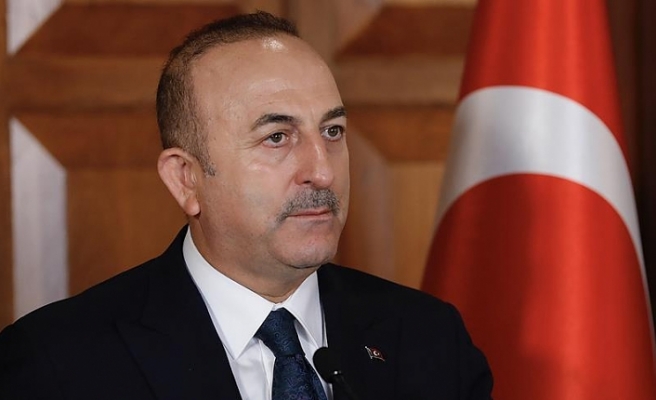 Turkey has made clear that the process of withdrawing U.S. troops from Syria should not serve the terror group PYD/YPG, Turkey’s foreign minister said on Tuesday.

Speaking to reporters in the capital Ankara to evaluate the Turkey’s 2018 foreign policy, Mevlut Cavusoglu said: “We’ve clearly conveyed that the process should not serve the separatist agenda of the PYD/YPG.”

Turkey and the U.S. agreed to complete Manbij roadmap before US would finish its withdrawal from Syria, Cavusoglu added.

Turkish and U.S. troops began joint patrols in Syria's northwestern Manbij on Nov. 1 as part of an agreement that focuses on the withdrawal of PKK/YPG terrorists from the city to stabilize the region.

Cavusoglu stressed that France's presence in Syria to protect terrorist YPG would help neither France nor YPG.

Turkey has the power to single-handedly neutralize Daesh in Syria, Cavusoglu added.

Turkish President Recep Tayyip Erdogan has signaled that a cross-border operation against the terrorist PYD/YPG in Syria will happen soon. Since 2016, Ankara has carried out two similar military operations in northern Syria.

U.S. President Donald Trump last week made the surprise announcement that the U.S. would withdraw its troops from Syria, following a phone call with Erdogan in which the two leaders agreed on the need for more effective coordination over the civil war-torn country.

Also addressing the humanitarian crisis in Yemen, Cavusoglu said Turkey called on the Organization of the Islamic Cooperation (OIC) contact group to hold a meeting in Istanbul on Jan. 10 to discuss the situation.

Yemen has been dogged by conflict since 2014, when Houthi rebels overran much of the country, including the capital Sanaa, forcing the government to take up temporary residence in the coastal city of Aden.

The following year, Saudi Arabia and several of its Arab allies launched a massive air campaign in Yemen aimed at retaking Houthi-held territory on behalf of the country’s pro-Saudi government.

The air campaign has devastated much of Yemen's basic infrastructure, including health and sanitation systems, prompting the UN to describe the situation as “one of the worst humanitarian disasters of modern times”.

The Turkish Red Crescent (Kizilay) and other groups which provide aid, including Turkey’s state Religious Affairs Directorate (Diyanet), have recently launched campaigns to raise money to help the people of Yemen.