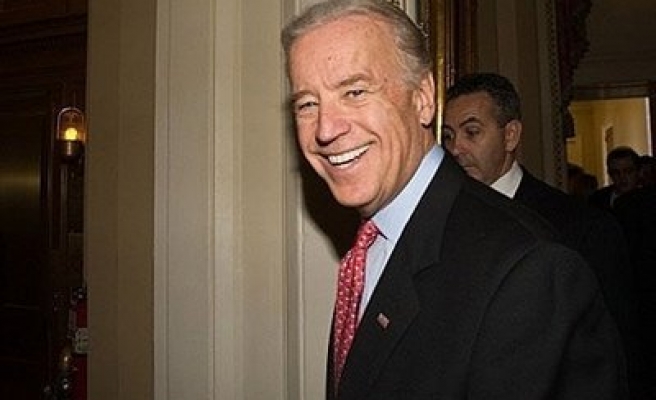 U.S. Vice President Joe Biden arrived in Istanbul on Friday for official talks with Turkish officials amid strained relations over the Syria crisis.

After his trips to Morocco and Ukraine, Biden met with Prime Minister Ahmet Davutoglu within the framework of a working dinner at the prime ministry office in Besiktas district of the city.

"We've been friends for a long time and one of the great advantages of being back in Turkey with a friend and NATO ally is we're always direct with one another," U.S. Vice President Joe Biden told a joint news conference with Davutoglu.

"We have tackled a number of very contentious issues regionally and internationally and we've always eventually come out on the same side," he said.

Speaking just before Biden's arrival in Istanbul, Davutoglu, who has spent the last two days in Iraq, said there could be no sustainable peace in Syria while Assad remained in power.

"Look at how things are getting better in Iraq after a government chosen by the people is in place," he told reporters at Istanbul airport.

"But in Syria, you can't bring peace trying to destroy a terrorist organization on one side of the country, while a regime in Damascus is using all sorts of weapons to exterminate a portion of its own people on the other."

The talks with Turkish Prime Minister Ahmet Davotoglu and President Recep Tayyip Erdoğan will focus on “cooperation in fighting the Islamic State of Iraq and the Levant in Syria and Iraq; and coping with the humanitarian crisis caused by the conflicts on the other side of Turkey’s southern border,” a statement from the White House said on Tuesday.

It is Biden’s first visit to Turkey since he criticized the country, in a speech at Harvard University on Oct. 2, for inaction against ISIL.

His comments angered Erdogan, who said at the time, “Biden has to apologize for his statements," or become "history to me."

On Oct. 4, the White House released a statement saying, "The vice president apologized for any implication that Turkey or other allies and partners in the region had intentionally supplied or facilitated the growth of ISIL or other violent extremists in Syria."

Biden -- who landed at Ataturk Airport, after his trips to Morocco and Ukraine, along with his wife Jill -- will attend a working dinner with the prime minister at the prime ministry office in Besiktas district of the city.

On Saturday, Biden will attend the sixth annual Energy and Economic Summit hosted by the Atlantic Council in the city, and deliver a speech at the closing session of the summit. Then the vice president is to meet with the “Checks and Balances Network,” a group funded by the National Democratic Institute.

He is to meet with President Recep Tayyip Erdogan for a working lunch at the Beylerbeyi Palace.

Joe Biden is to leave Turkey for Washington on Sunday after a meeting with Istanbul-based Greek Orthodox Patriarch Bartholomew I, spiritual leader of the world’s Eastern Orthodox churches.