For the past 235 days, Morsi supporters have been staging rallies to denounce what they describe as the "military coup" against the elected president 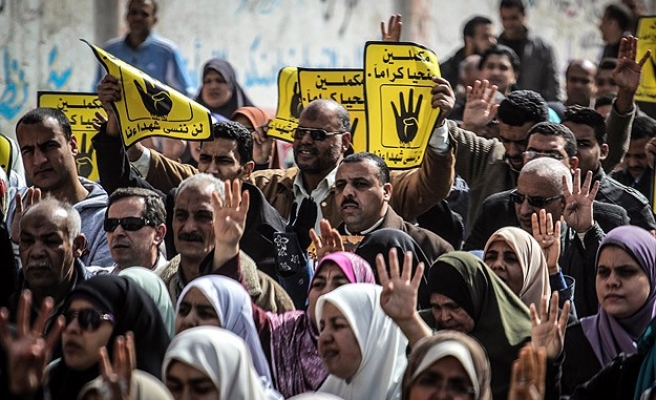 Backers of ousted president Mohamed Morsi staged early morning rallies on Friday at the start of a new weeklong wave of protests.
Anti-coup protestors organized a rally in Faisal district, west of Cairo, amid chants against army chief Abdel-Fattah al-Sisi, who led the army to unseat Morsi on July 3 following mass protests against his presidency.

Demonstrators flashed the four-fingered Rabaa salute in memory of the killing of hundreds of pro-Morsi protesters during the mid-August dispersal of their protest camps in Cairo.

A pro-Morsi rally was staged in Shubra al-Kheima district, north of Cairo, amid calls for the release of detainees.

The rallies were also staged in the coastal city of Alexandria and the Nile Delta provinces of Kafr al-Sheikh, Menoufiya and Sharqiya.

Friday's rallies are part of a new weeklong wave of protests called for by the pro-Morsi National Alliance for the Defense of Legitimacy.

For the past 235 days, Morsi supporters have been staging rallies on an almost daily basis to denounce what they describe as the "military coup" against democratically elected Morsi.
Last Mod: 21 Şubat 2014, 14:14
Add Comment