Abbott said on Sunday a 600-strong force comprising some 400 airforce personnel and 200 special forces soldiers would be deployed to a U.S. military base in the United Arab Emirates. 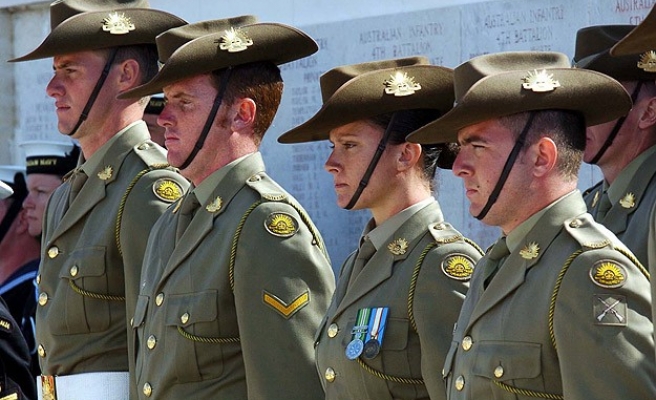 Australia became the first country to detail troop numbers and aircraft for a U.S.-led coalition fighting ISIL militants in Iraq, as Washington drums up support for global action to counter the threat.

Australia Prime Minister Tony Abbott said on Sunday a 600-strong force comprising some 400 airforce personnel and 200 special forces soldiers would be deployed to a U.S. military base in the United Arab Emirates.

A number of countries have responded to U.S. President Barack Obama's call to join a coalition against ISIL, but Australia is the first to publicly provide specific troop numbers and military hardware for the mission.

Obama is leading an effort to form a coalition of Western allies and Gulf Arab states to take on the group, whose savage methods have included beheading two American journalists and a British aid worker.

Abbott said along with the troops, Australia would send eight super hornet fighter jets, an early warning and control aircraft and an aerial refuelling aircraft. He said they would be deployed in the coming days.

A task group of military advisers to assist Iraqi and other security forces fighting the militants would form part of the deployment but Abbott said he had not yet made the decision to commit troops to combat action.

"I have to warn the Australian people that should this preparation and deployment extend into combat operations, that this could go on for quite some time," he told reporters in the northern city of Darwin.

Abbott said Australia did not intend to operate in Syria.

Obama announced his plans in a prime time address on Wednesday to build an alliance to root out ISIL in both Syria and Iraq, plunging the United States into two conflicts in which nearly every country in the Middle East has a stake.

U.S. Secretary of State John Kerry is touring the Middle East to try to secure backing for the plan, and on Thursday won the backing for a "coordinated military campaign" from 10 Arab countries - Egypt, Iraq, Jordan, Lebanon and six Gulf states including rich rivals Saudi Arabia and Qatar.

However, a lack of detail on commitments from NATO allies and Turkey's reluctance to play a frontline role have highlighted the difficulty of building a willing coalition for a complex military campaign.

Britain has said it supports U.S. air strikes and Prime Minister David Cameron has said repeatedly that Britain itself has ruled nothing out except combat troops on the ground.

Like Australia, Britain has delivered humanitarian aid, carried out surveillance, given weapons to Kurds and promised training in Iraq.

France has confirmed its commitment to use military force in Iraq, but it was unclear whether France would join strikes in Syria. Germany has said it won't take part in air strikes.

U.S. officials say Kerry is also seeking permission to make more use of bases in the region and fly more warplanes overhead.

The United States resumed air strikes in Iraq in August for the first time since the withdrawal of the final U.S. troops from the country in 2011.

The raids followed major gains by ISIL, which has declared a caliphate in areas it controls in Syria and Iraq, as well as a series of grisly videos showing the beheading of captured Westerners.

ISIL stirred new outrage on Saturday with a video purporting to show the beheading of British aid worker David Haines. British Prime Minister David Cameron called it "a despicable and appalling murder," and vowed to bring the killers to justice.

Describing the ISIL as a "death cult", Abbott said the beheadings had made him "more resolved than ever to do what we reasonably can to disrupt, degrade and if possible, destroy this movement".

The Australian government on Friday raised its domestic terror alert to 'high' for the first time, citing the likelihood of attacks by Australian citizens radicalised in Iraq or Syria.

Up to 160 Australians have either been involved in fighting there or actively supported it, officials say, and at least 20 have returned to Australia after fighting in the Middle East and pose a national security risk.