The survey showed first-round support for Santos slipped from 36 percent in the previous poll in December. 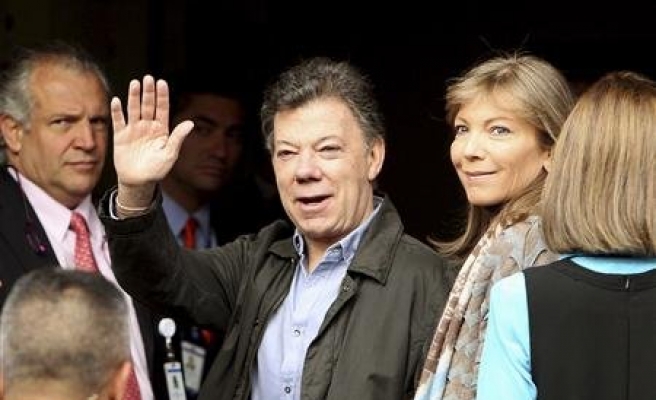 Colombia's President Juan Manuel Santos would be re-elected during a second round of voting in presidential elections this year, according to pollster Gallup, leading with a wide margin against his closest rival.

Santos, who is running for a second straight term, would beat right-wing candidate Oscar Ivan Zuluagaby 34.7 percent to 10.8 percent in the first round on May 25, forcing a second vote three weeks later, according to the poll.

A candidate must garner more than 50 percent of the ballot to avoid a runoff.

The survey, carried in newspapers El Espectador and La Republica on Wednesday, showed first-round support for Santos slipped from 36 percent in the previous poll in December.

The second biggest block of voting remains the so-called "blank vote" in which 28.1 percent of the electorate say they would mark the ballot sheet as none of the above. The protest vote is unusually high less than four months before the election but is expected to fall significantly.

Center-right Santos would beat Zuluaga to the presidency by 47.1 percent to 22.8 percent in the second round on June 15.

While campaigning has been slow to start, the election is expected to be particularly bitter.

Uribe, who preceded Santos in office, and Zuluaga have slammed government peace talks with Marxist FARC guerrillas and said Santos is endangering the nation by offering rebel leaders too much at the negotiating table.

There also have been scores of death threats against leftist candidates for congress, and presidential candidate Aida Avella, of the Patriotic Union.

Santos, who represents the U Party, took office in 2010 with an approval rating of 74 percent and maintained about 50 percent ratings through the beginning of peace talks in 2012 with the FARC, orRevolutionary Armed Forces of Colombia.

Late last year the two sides reached agreement on the rebels' participation in the political system, the second and possibly toughest item on a five-point peace agenda.

They are now discussing how to tackle drug trafficking.

In September his support slumped to a record low after a two-week farmers' strike was broadcast on television with images of riot police wearing armor confronting workers dressed in ponchos.

The new Gallup poll showed an improvement in Santos' popularity for a fourth month. Approval for Santos rose to 48.1 percent from 45.1 percent in December.

The nationwide poll surveyed 1,200 people between Feb. 5 and 9. It carried a margin or error of plus or minus 3 percent.

The recent entrance of Conservative Party candidate Marta Lucia Ramirez siphoned votes away from Zuluaga of the Democratic Center party, the poll showed.

She would win 8.5 percent in the first round, while Enrique Penalosa of the Green Alliance would garner 8.6 percent.

Support for Uribe, who backed Santos in the 2010 election and is running for Senate on March 9, saw his favorability rating fall to 60.5 percent from 70.2 percent in December.