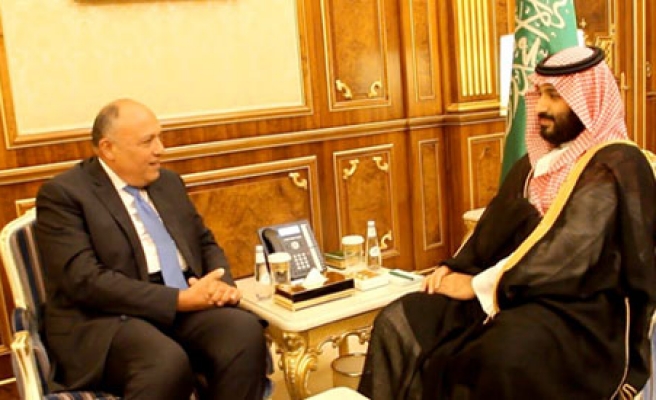 The talks focused on the regional developments, most notably, the situation in Lebanon and the Ethiopian Renaissance dam.

According to the statement, Shukri conveyed to Mohammed bin Salman an oral message from Egyptian President Abdel Fattah al-Sisi to Saudi King Salman bin Abdul Aziz, stressing the depth and specificity of the Egyptian-Saudi relations and the “full support of Egypt and its solidarity with the Kingdom in facing challenges”.

"Egypt is keen to avoid the region any tensions that increase instability and polarization," Shukri said after .


The statement comes after Lebanese Prime Minister Saad Hariri's resignation in a televised address from Saudi Arabia as well as the  launching for two missiles from Yemen towards the Saudi capital Riyadh on Nov. 4.

The Egyptian foreign minister stressed "Egypt's condemnation of the recent attack on the Kingdom”.

Al-Jubeir also stressed the importance of full respect for the framework agreement (signed between Egypt, Sudan and Ethiopia in March 2015) over the Renaissance Dam, especially in  light of Egypt's flexibility throughout the negotiation process.

He pointed to "the Kingdom's understanding of the Egyptian concerns over its water security and the importance of abiding by the rules of international law in this regard".

On Monday, Cairo revealed that "technical talks on the Renaissance Dam had been frozen".

In 2011, Ethiopia began  building a 6,000-megawatt Renaissance Dam over the Blue Nile River. However, Khartoum and Cairo have expressed concern over the potential negative impact the dam could have on both countries' water shares.

Saudi Arabia is the sixth and last stop of an Arab tour the Egyptian foreign minister began last Sunday and included Jordan, Bahrain, Kuwait, UAE and Oman, according to an earlier statement of the Egyptian Foreign Ministry.