Four leaders involved in Ukraine peace talks in the Belarussian capital left the negotiating room after hours of talks overnight, Interfax news agency said. But a Reuters correspondent said he believed Ukrainian President Petro Poroshenko, Angela Merkel and Francois Hollande were still there, with Vladimir Putin in a different place at the summit site. 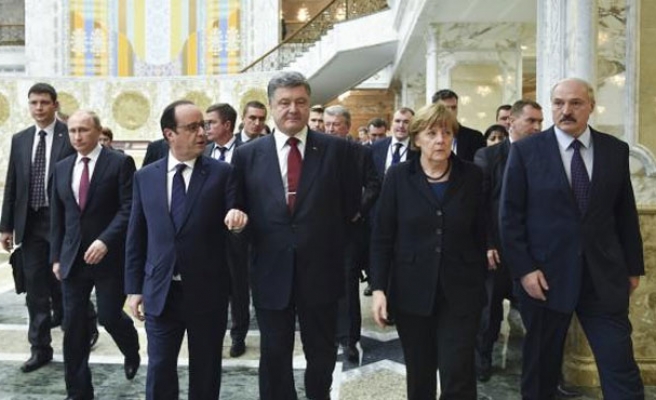 The leaders of Ukraine, Russia, Germany and France may be close to agreement following all-night talks on resolving the Ukraine conflict, diplomatic sources said on Thursday.

Details remained unclear after more than 12 hours of peace talks in the Belarus capital Minsk, with one source saying there was hope agreement could reached and another saying a document would be signed.

But the document, which may be a joint declaration rather than a full agreement, may be signed by lower level envoys rather than by the leaders themselves, the sources said.

Ukrainian President Petro Poroshenko said certain conditions set by Russia at talks in Minsk on the Ukraine conflict were unacceptable but there still was hope, Russian news agency reported on Thursday. Poroshenko said there was no good news yet from the talks, TASS reported, citing Agence France Presse.

The sources said any agreement would however be sent to a "contact group" which includes representatives of the pro-Russian rebels, whose involvement could be crucial.

The discussions came as pro-Moscow separatists tightened the pressure on Kiev by launching some of the war's worst fighting on Wednesday, killing 19 Ukrainian soldiers in assaults near the railway town of Debaltseve.

Fighting has already killed more than 5,000 people, and Washington is now openly talking of arming Ukraine to defend itself from "Russian aggression", raising the prospect of a proxy war in the heart of Europe between Cold War foes.

The summit was held in neighbouring Belarus under a Franco-German proposal to try to halt the fighting in eastern Ukraine.

A Ukrainian presidential aide, Valeriy Chaly, had earlier described the four-way talks as "a battle of nerves".

As the talks began, Poroshenko said that without a de-escalation of the conflict and a ceasefire the situation would get "out of control".

The outcome of the talks is expected to influence discussions at an EU summit in Brussels on Thursday, when sanctions against Moscow will be on the agenda.

The talks were taking place while an International Monetary Fund mission was negotiating a bailout to save Ukraine from bankruptcy.

Prime Minister Arseny Yatseniuk said on Wednesday he hoped for a deal in the next 48 hours and IMF chief Christine Lagarde said she would make a statement early on Thursday.

Kiev and NATO accuse Russia of supplying separatists with men and weapons. Moscow denies it is involved in fighting for territory Putin calls "New Russia".

If the French and German leaders hoped their peace initiative would be met by conciliatory moves on the ground, the prospect of talks appears to have encouraged the pro-Russian rebels determined to drive home their advantage.

Armoured columns of Russian-speaking soldiers with no insignia have been advancing for days around Debaltseve. Last week they captured the small town of Vuhlehirsk next to Debaltseve.

On the Russian side of the border, Moscow announced war games on Tuesday on the eve of the talks.

The United States has been openly discussing arming the Ukrainian government, a move that is opposed by European allies who say it would escalate the conflict while falling far short of giving Kiev the firepower needed to win.

President Barack Obama says he has yet to make up his mind on the question of sending weapons. He spoke by phone to Putin on Tuesday, and the White House said he warned the Russian leader that the costs would rise if Moscow kept aiding the separatists.