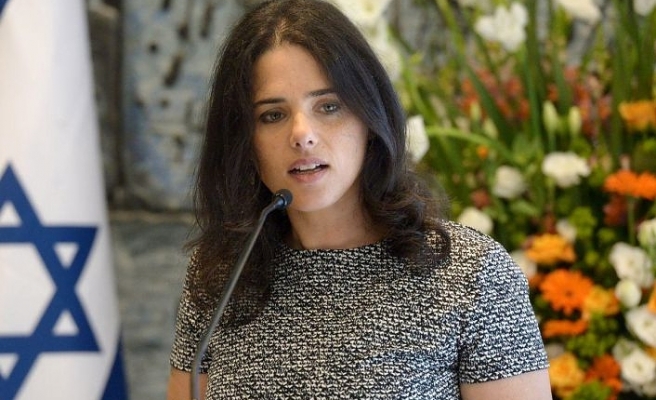 "I hope that they (Kurds) will win in their battle against the Turks. I hope that the international community will prevent Erdogan from massacring the Kurds," the Jerusalem Post quoted Justice Minister Ayelet Shaked as saying on Dec. 23.

Shaked was referring to Turkey's planned counter-terror operation against PYD/YPG terrorists in the region east of the Euphrates River in Syria.

Since 2016, Ankara has carried out two similar military operations in northern Syria.

The Israeli minister also said the U.S. withdrawal from Syria does "not help Israel and strengthens Erdogan".

Last week, U.S. President Donald Trump ordered all U.S. forces in Syria to withdraw from the country, saying Daesh's defeat was his sole reason for being in the civil war-torn country.

It is not the first time that Shaked has made provocative remarks, as she shared offensive remarks made by the Israeli prime minister's former advisor against the families of Palestinian martyrs in 2014.

"Behind every terrorist stand dozens of men and women, without whom he could not engage in terrorism. They are all enemy combatants, and their blood shall be on all their heads. Now this also includes the mothers of the martyrs, who send them to hell with flowers and kisses. They should follow their sons, nothing would be more just. They should go, as should the physical homes in which they raised the snakes. Otherwise, more little snakes will be raised there," Shaked shared these remarks on Facebook in 2014 when she was a lawmaker.

These remarks against Palestinians belong to Uri Elitzur, an ex-advisor to Israeli Prime Minister Benjamin Netanyahu.

In 2015, Netanyahu appointed Shaked as justice minister, a move seen as a reward for the Facebook post she shared.