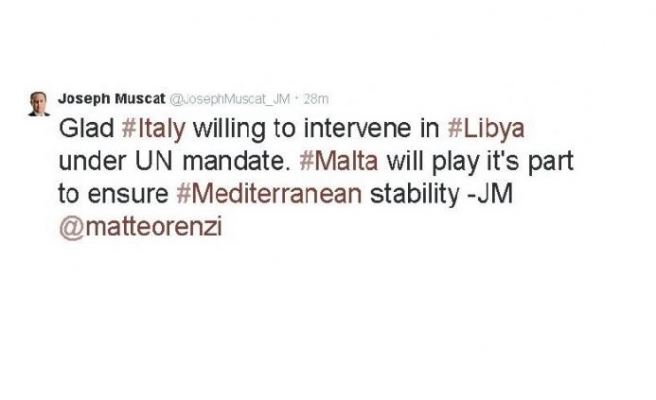 Italy would be ready to join a U.N.-led force to battle "an active terrorist threat" after recent advances by a faction in Libya that has sworn loyalty to ISIS militants, Italian Foreign Minister Paolo Gentiloni said on Friday.

In an interview with SkyTG24 television, Gentiloni said Italy backed efforts by United Nations special envoy Bernardino Leon to bring warring factions to the table to try to broker a ceasefire.

But he said should talks fail, Italy "is ready to fight naturally in the context of an international mission".

"We cannot accept the idea that there's an active terrorist threat only a few hours from Italy by boat."

The situation in Libya, already chaotic, "is deteriorating", Gentiloni said, adding that Italy "cannot underestimate" the possibility of an attack by Islamic State militants.

In recent days, Italian officials have made generic statements about being willing to lead a UN force in Libya, but Gentiloni's comments on Friday mark a more aggressive stance.

Gentiloni spoke after media reports toay that fighters claiming allegiance to Islamic State militants in Iraq and Syria had taken control of radio and television stations in Sirte, a coastal city halfway between Tripoli and Benghazi.

Until recently, the Islamic State faction appeared to have limited power and to be confined mostly to the city of Derna, he said.

The main power struggle in Libya, which has been the focus of the U.N. talks, is between an internationally-recognised government and a rival administration set up in Tripoli after an armed faction seized the capital last summer.

Both are backed by brigades of fighters who helped oust veteran leader Muammar Gaddafi in 2011 but have since turned against one another in a complex conflict involving tribes, former Gaddafi troops, Islamist militants and federalist forces.

People traffickers there have taken advantage of the chaos to send tens of thousands of refugees and migrants in small, overcrowded boats towards Italy.

More than 300 migrants died trying to reach Italy from Libya in stormy seas this week. The UN refugee organisation says at least 218,000 migrants crossed the Mediterranean by boat last year and 3,500 lives were lost.