Japanese PM Abe said Japan was firmly committed to fulfilling its responsibility as a member of the global community in fighting terrorism and that it needed to be able to protect its citizens. 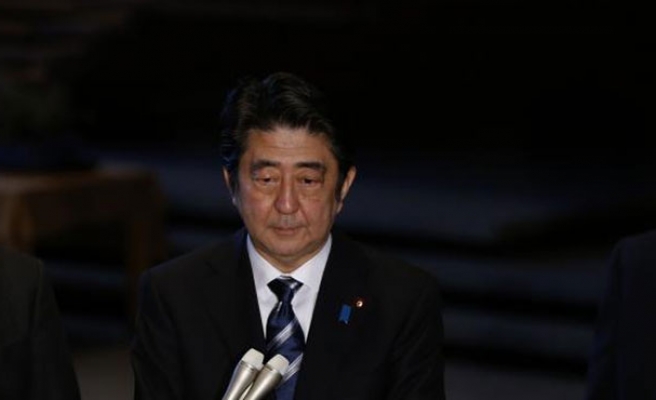 Japanese Prime Minister Shinzo Abe said on Monday he wanted to debate the possibility of Japan's military rescuing Japanese citizens abroad, a day after ISIS said they had beheaded a Japanese journalist.

ISIS said on Sunday they had beheaded Kenji Goto, a veteran war reporter, after international efforts to secure his release through a prisoner swap failed. They killed another Japanese hostage, Haruna Yukawa, a week before.

Abe reiterated his denunciation of the militants and said Japan was firmly committed to fulfilling its responsibility as a member of the global community in fighting terrorism and that it needed to be able to protect its citizens.

"Preserving the safety of Japanese nationals is the responsibility of the government, and I am the person who holds the most responsibility," Abe told a parliamentary committee, adding that he wanted to discuss a framework for rescuing Japanese in danger.

In a show of defiance on Sunday, Abe vowed to boost Japan's humanitarian aid to the Middle East.

ISIS, which controls large parts of Syria and Iraq, released a video purporting to show the beheading of Goto, 47, who was captured in late October.

The video was released a week after footage was issued appearing to show the beheaded body of Yukawa, who the militants seized in August after he went to Syria to launch a security company.

The killings are fanning calls for Japan's long-constrained military to be allowed to conduct overseas rescue missions as part of Abe's push for a more muscular security posture.

Abe told a parliamentary panel that Japan, whose military has long been constrained by the post-World War Two pacifist constitution, could not take part in U.S.-led air strikes on ISIS, nor would it provide logistical support.

Scope for the military to mount rescue missions is limited by law but the government already plans to submit revisions to parliament to ease restrictions.

Even some advocates of changes to make rescues possible, however, say Japan's military faces difficulty in acquiring the capacity to conduct such missions. Critics say sending troops overseas would just increase the risk.

It dodged the question of whether planned legal changes would allow rescue missions in such cases, but a Japanese defence official said it would not.

Abe's government had put high priority on saving Goto, who was captured when he went to Syria to try to seek Yukawa's release.

An ISIS video was released on Jan. 20 appearing to show both Japanese men and threatening to kill them unless the group received $200 million in ransom.

Chief Cabinet Secretary Yoshihide Suga, speaking to reporters on Monday, shrugged off speculation that Japan was ready to pay a ransom, adding that the government had no intention of negotiating with the militants.

Goto's wife, Rinko, who had appealed for his release, said she and the rest of the family were devastated.

"I remain extremely proud of my husband, who reported the plight of people in conflict areas like Iraq, Somalia and Syria," she said in a statement posted on the Rory Peck Trust, a London-based organisation supporting freelance journalists.

"It was his passion to highlight the effects on ordinary people, especially through the eyes of children, and to inform the rest of us of the tragedies of war."

An opinion poll by Kyodo news agency on Jan. 25, just after Yukawa was killed, found 61 percent of respondents supportive of the government's response.