Jerusalem’s Dome of the Rock shut over ‘Jewish cap’ 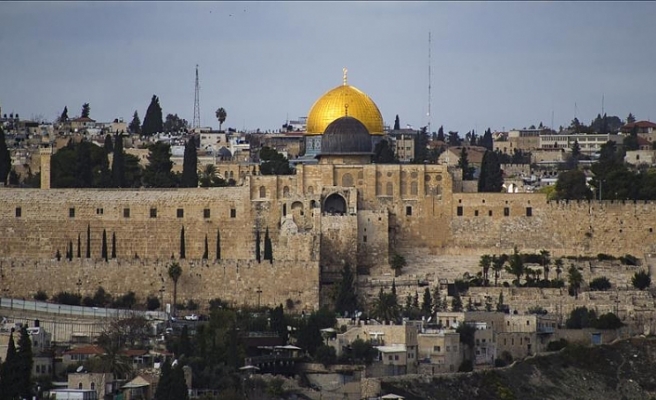 Palestinian authorities shut Jerusalem’s iconic Dome of the Rock mosque on Monday after an Israeli policeman attempted to force his way into the place, according to a spokesman.

“The guards asked the policeman to take off his cap before entering the mosque, but he refused and attempted to force his way into the place, prompting the guards to close it,” he said.

Al-Dibs said two Israeli policemen conduct a tour inside the mosque every day for security reasons.

"They toured the courtyards of the mosque under protection of [Israeli] police," he said.

According to al-Dibs, Israeli police assaulted Director of the Al-Aqsa Mosque, Omar al-Kiswani.

"Al-Kiswani was transferred to hospital for treatment," he said.

The spokesman said Israeli policemen have deployed inside the Al-Aqsa compound and demanded Palestinian guards to surrender themselves.

“The situation is very tense as the guards and worshippers refuse to obey the Israeli order,” he said.

For Muslims, the Al-Aqsa represents the world's third holiest site. Jews, for their part, refer to the area as the “Temple Mount”, claiming it was the site of two Jewish temples in ancient times.

Israel occupied East Jerusalem during the 1967 Arab-Israeli War. It annexed the entire city in 1980, claiming it as the capital of the Jewish state -- a move never recognized by the international community.