Kerry 'confident' ISIL will be defeated

ISIL is striking in Europe because its territories in Syria are shrinking, says US Secretary of State John Kerry in Brussels three days after attacks 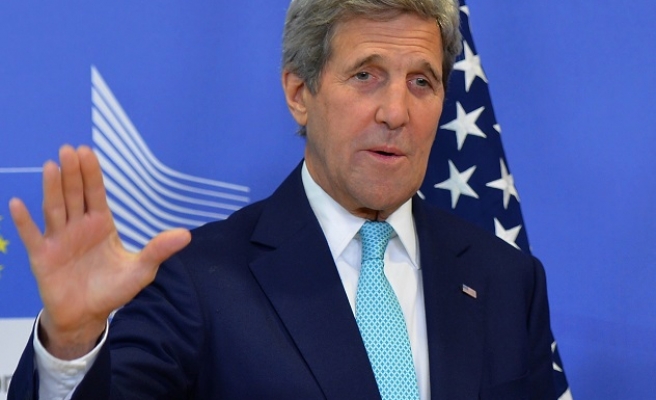 U.S. Secretary of State John Kerry has said he was "confident" that the Western allies will defeat ISIL, which claimed responsibility for the Brussels bombings that killed 31 people on Tuesday.

Speaking in Brussels at a joint news conference with Belgium’s Prime Minister Charles Michel on Friday, Kerry said: "I am confident that we will be successful in destroying ISIL and restoring a sense of tranquility and peace to communities."

"We will not be intimidated, we will not be deterred and we will come back with greater resolve, greater strength and will not rest until we have eliminated your nihilistic beliefs," Kerry said, targeting ISIL.

Kerry said the reason ISIL was striking in Europe and outside its territories in Syria is because the terror group’s "fantasy of a caliphate is collapsing before their eyes and their territory is shrinking".

The U.S. leads the coalition, which includes Belgium, in the fight against ISIL.

Belgian police on Thursday evening arrested six suspects in the Brussels neighborhoods of Schaerbeek and Jette -- located in the northern and western part of the city, respectively -- public broadcaster RTBF reported, citing the public prosecutor. A seventh suspect was also arrested in the Forest neighborhood of Brussels early Friday, RTBF said.

Tuesday's bombings at the Brussels airport Zaventem and Maelbeek metro station came four days after the arrest of Paris attacks suspect Salah Abdeslam and a week after a police shootout in the Brussels district of Forest where a suspected ISIL member was shot dead.

Belgium’s interior minister Jan Jambon and justice minister Koens Geens offered their respective resignations – rejected by Prime Minister Michel – after reports emerged that Belgium had been warned about one of the suicide bombers.

A day after the blasts at an airport and metro station in Brussels, Turkish diplomatic sources revealed one of the suspected airport bombers had been deported from Turkey after being arrested in July last year near the Syrian border.