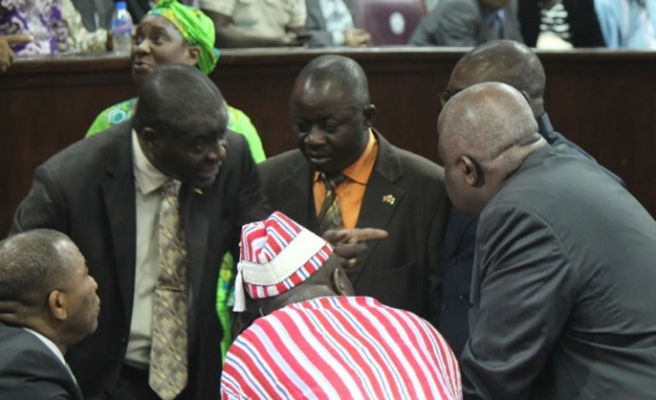 Liberian opposition Liberty Party leader Charles Brumskine on Monday called for the Board of Commissioners of the National Election Commission to be recused from hearing the party's complaints that the first round of presidential and legislative elections was marred by fraud and irregularities.

Brumskine’s request comes after the Supreme Court on Monday ordered the suspension of Tuesday’s polls to address the issue.

“I caution you that today’s opinion of the Supreme Court is not the end. It is only the beginning. Evil, which has taken us down this road, is going to strike back with venom, so all who can pray, join us in praying” he said.

A few hours after the court’s ruling, Brumskine in his address to the nation said he and his party do not feel comfortable having the commissioners preside over their case and accused them of prejudging the party's evidence ahead of the start of the investigation.

“No, we are not comfortable, and my lawyers will be asking the commissioners to recuse themselves because they have already prejudged the evidence and the case,” he said.

Prior to Monday’s court ruling, the chairman of the election commission said at a press conference that evidence the Liberty Party claimed to have was “fake”.

Brumskine’s reaction comes after the Supreme Court on Monday ruled in his party’s favor when it ordered the suspension of the Nov. 7 presidential election run-off between current Vice President Joseph Boakai and former football star George Weah in order to consider a challenge of the first-round results.

In his ruling, Chief Justice Francis Korkpor said the election commission should have investigated the Liberty Party’s complaints before it reached the Supreme Court.

The party after the end of the first round of polls on Oct. 10 complained to the election commission of alleged gross fraud and irregularities and called for a rerun of the entire election.

Brumskine vowed to fight his case legally to the end but promised citizens there will be no acts of violence in their pursuit of the law in their complaints.