Major events that left their marks on 2018 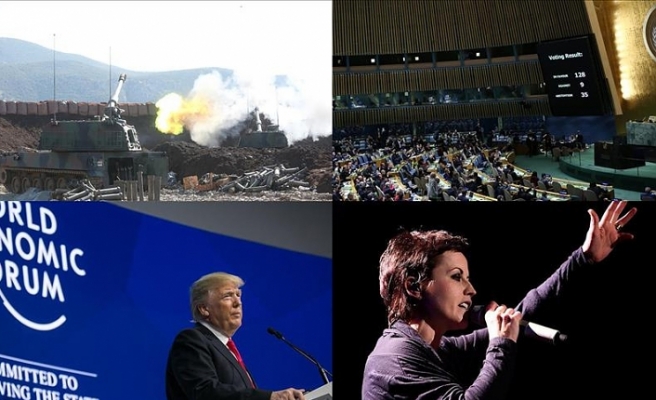 Here are the main developments of 2018 day by day, and month by month:

- U.S. President Donald Trump weighs in with his sharp views on the developing situation in Iran where thousands of people were protesting against the government for several days.

- An extreme cold weather has been suspected in the deaths of at least nine people across the U.S. with temperatures expected to remain exceptionally low.

- Trump threatens to cut aid to Palestine following an embarrassing diplomatic defeat at the United Nations on Jerusalem resolution, calling on U.S. to withdraw its recognition of the city as Israel's capital in December 2017.

- Turkish banker Hakan Atilla is found guilty by a jury in New York on five charges related to conspiracy and bank fraud but is acquitted of money laundering.

- At least 14 people are killed and hundreds injured when a passenger train derails and collides with a truck and another vehicle some 190 kilometers (118 miles) from the South African capital.

- Turkish President Recep Tayyip Erdogan arrived in Paris for a one-day visit. During his stay, Erdogan had a private meeting with French President Emmanuel Macron at the Elysee Palace.

- Prominent Turkish actor Munir Ozkul dies at 93. A distinguished Turkish cinema and theater actor, died at his house in Istanbul, his family confirmed.

- At least 90 students have been detained since protests began in Iran a week earlier.

- Israeli forces detained 3,617 Palestinians in the West Bank and Gaza Strip in 2017, according to the Israeli military.

- At least 30 people were killed and 70 others injured in four explosions in Syria’s northern province of Idlib.

- The Trump administration moved to end the temporary residencies of 200,000 El Salvadorans who had been living in the U.S. for more than 15 years, following two devastating earthquakes that roiled their home country in 2001.

- Turkish President Recep Tayyip Erdogan says it is time to counter PKK terrorists from forming a corridor in northern Syria, along the Turkish border.

- U.S.’ Trump denies using derogatory and vulgar language to describe immigration from Latin American and African countries after widespread condemnation after he reportedly says, "Why are we having all these people from s***hole countries come here?”

- An earthquake measuring 7.3 on the Richter scale hits the coast of Peru.

- Ten construction workers in central Colombia were killed when a section of the bridge they were working on collapsed.

- At least 25 people are killed in a double suicide bombing in the Iraqi capital Baghdad.

- Kosovo Serb politician Oliver Ivanovic is assassinated in a drive-by shooting in the northern town of Mitrovica in Kosovo.

- The U.S. will suspend $65 million in aid to Palestine, the State Department announces, two weeks after President Donald Trump's criticism about the funding.

- Turkey’s Erdogan receives Fawzi al-Juneidi, a Palestinian teen who becomes a symbol of Palestinian opposition to the U.S. decision of recognizing Jerusalem as Israel’s capital. Al-Juneidi was arrested on Dec. 7 in the West Bank city of Hebron (Al-Khalil) after being dragged on the ground and blindfolded by heavily armed Israeli soldiers.

- Global approval of U.S. leadership hits an all-time low as Trump prepares to round out his first year in office, according to a poll.

- At least 52 people are killed in a bus fire in northwestern Kazakhstan.

- Russia makes its first delivery of S-400 missile system components to China under a contract signed in 2014, a source close to Russian system of military cooperation tells journalists.

- Israeli police detains six Turkish nationals who has been visiting Jerusalem’s iconic Al-Aqsa Mosque, eyewitnesses say. The six are released a day after.

- U.S.’ Trump signs a stopgap-spending bill into law to fund the government through early February, drawing a three-day shutdown to a close.

- At least 34 people are killed and dozens injured in a double car bombing in Libya’s eastern city of Benghazi.

- Turkey has the right to self-defense like all other countries, NATO’s secretary-general, Jens Stoltenberg, says as Turkey continues targeting terrorist positions in northern Syria.

- A group of scientists moves the "doomsday clock" 30 seconds closer to midnight Thursday, citing the looming threats of nuclear conflict and climate change. The clock has now advanced to two minutes to midnight, a metaphor for the end of humanity.

- Trump at the World Economic Forum in Davos is booed after he calls the press "nasty", "mean", "vicious", and "fake".

- At least 41 people are killed in a South Korean hospital fire, with fears the death toll could rise further as at least 79 patients and staff are taken to other medical facilities.

- At least 14 people are killed when gunmen storm a nightclub in northeastern Brazil.

- Bruno Mars walks away from the 60th Grammy Awards with the album, record, and the song of the year honors, in what is a pointedly political star-studded affair.

- The U.K. will be worse off in every scenario should it proceed with Brexit, according to a leaked government analysis of the economic impact of leaving the EU.

- Germany will keep its embassy in Israel's Tel Aviv until a two-state solution between Palestinians and Israelis is found, says Foreign Minister Sigmar Gabriel.

- Court of Arbitration for Sport overturns International Olympic Committee suspensions for 28 Russian athletes over doping at the 2014 Winter Olympics, while partially upholding 11 other appeals.

- Darren Osborne, 48, found guilty of murder and attempted murder by a British court after driving his van into a crowd outside an Islamic center in north London. He was handed a life sentence with a minimum 43 years behind bars.

- Nearly 1,000 mineworkers trapped underground at gold mine in South Africa brought to the surface, company running the mine says.

- An estimated 90 migrants drown after a boat capsized off coast of Libya in the Mediterranean Sea, the UN migration agency said.

- Nicos Anastasiades re-named as Greek Cypriot leader in the second round of an election.

- Conflicts in the Middle East and North Africa take 'a brutal toll' on children, with the fighting in Syria leaving 59 children dead in January alone, according to the UN.

- The Netherlands formally withdraws its ambassador to Turkey over a 2017 row.

- Ben Mustapha Ben Odeh, an icon of the Algerian resistance against forces of French colonialism, dies at age 93.

- Olympic Winter Games kick off in PyeongChang, South Korea with an opening ceremony themed around peace.

- Bus accident kills at least 26 people and injures 17 others in central Indonesia.

- Russian airplane with 71 people on board crashes in Moscow suburbs.

- Pentagon requests $300 million to train and equip PYD/PKK terror group that goes by the name of the SDF, and wants nearly as much to build the terror group-led 'border security force' in Syria.

- At least 46 people, including 19 women and 27 children, freed from Boko Haram captivity after troops destroy another hideout of the proscribed armed group in northeastern Borno state.

- LeBron James carries his team to a 148-145 victory in the NBA's 67th All-Star Game in Los Angeles, California.

- Iranian passenger plane crashes in central Iran, killing all 66 on board.

- At least 58 Syrian civilians killed and 45 injured in regime attacks in Damascus suburb of Eastern Ghouta.

- SpaceX successfully launches two satellites with the goal of beaming internet access across the globe.

- UN's special envoy for Syria reiterates his call for an immediate cease-fire amid 'horrific' bombings in besieged Eastern Ghouta.

- A painting by French impressionist Edgar Degas, stolen in 2009, found on a bus near Paris.

- Belgian local court rules a headscarf ban at local schools is against freedom of religion.

- More than 1,000 civilians, including women and children, have been killed since mid-November, 2017 in attacks by the Syrian regime and its allies including Russia in besieged Eastern Ghouta, according to a U.K-based human rights watchdog.

- Russia vetoes a draft UN Security Council resolution that would have censured Iran for failing to prevent its arms from reaching Yemen in violation of a UN-imposed arms embargo, drawing a stern rebuke from the U.S.

- U.K. faces another week of travel disruptions as freezing weather, dubbed the 'beast from the east', is forecasted to spread further, with Scotland and eastern England expected to be hit the worst.

- Scientists detect signals from the earliest stars in the universe for the first time ever.