An overview of the continent's main natural resources. 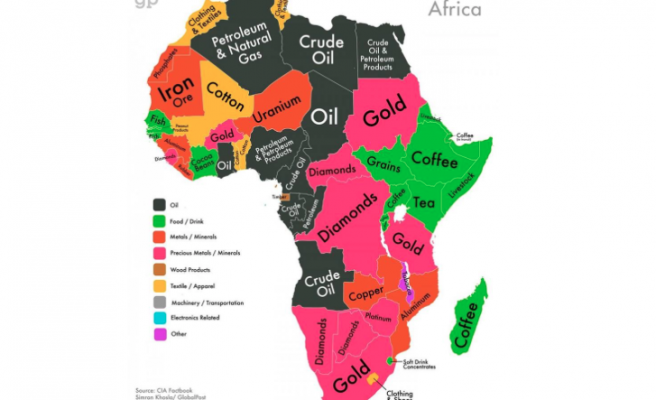 Africa remains a key territory on the global map. Rich in oil and natural resources, the continent holds a strategic position.

It is the world's fastest-growing region for foreign direct investment, and it has approximately 30 percent of the earth's remaining mineral resources.

It's home to more than 40 different nations, and around 2,000 languages. Sub-Saharan Africa has six of the world's 10 fastest-growing economies.

North Africa counts with vast oil and natural gas deposits; the Sahara holds the most strategic nuclear ore; and resources such as coltan, gold, and copper, among many others, are abundant on the continent.

The region is full of promise and untapped riches - from oil and minerals and land to vast amounts of people capital - yet, it has struggled since colonial times to truly realise its potential.

In many resource-rich African countries, lack of transparency surrounding resource development and revenue facilitates corruption that cripples the government's capacity to deliver basic services such as health and education as the funds that could have been spent on such desperately needed services are instead squandered or embezzled.

For example, Equatorial Guinea, a small but oil-rich country boasting the highest per capita income on the continent. But life expectancy and infant mortality are below the sub-Saharan African average. Roughly half the population lacks access to potable water, and immunization rates for children are among the world's lowest.

Other oil rich nations have also struggled with corruption for a long time. Earlier research by Human Rights Watch in Nigeria and Angola provides examples of the devastating effect of corruption in the oil sector can have on the lives of ordinary citizens.

At the turn of the century, Angola's development indicators remained among the worst in the world, while $4.2bn in oil revenues illegally bypassed Angola's central bank and disappeared without explanation from 1997 to 2002. That is roughly equal to all foreign and domestic social and humanitarian spending in Angola over that period.

In 2010, Human Rights Watch research concluded that while the Angolan government had introduced some important reforms in oil sector transparency, far more needs to be done to curb corruption and give Angolans the tools necessary to hold their government accountable for its actions. Indeed, both Nigeria and Angola have undertaken reforms and made progress in tackling this scourge in the years since Human Rights Watch's initial research but there is still some way to go.

Protecting vulnerable communities is another pressing problem. In the absence of strong laws and clear policies governing resettlement, rural communities have been forcibly displaced from their farmland and livelihood to make way for mining operations with inadequate compensation.

For example, rural families in Tete province in Mozambique or in Tonkolili verdant slopes in Sierra Leone who were once largely self-sufficient, but were moved aside to places unsuitable for farming and no access to water. Mozambique has since taken steps to improve its legal framework, but it still falls short on implementation.

Mining companies operating in Africa and the relevant governments have in many cases failed to secure free, prior, and informed consent from indigenous communities before they started operations on communal lands as provided for by international standards.

In Ghana, one of the world's top 10 gold producers, and Tanzania, Africa's fourth-largest gold producer, many small-scale mines are unregulated. The thousands of children who drop out of school to work in these operations risk death and ill-health.

Children have been injured and killed in mining accidents and are exposed to high levels of toxic mercury, which attacks the central nervous system and can cause lifelong disability, brain damage and even death.

Hazardous child labour in artisanal and small-scale gold mines across several countries is another urgent concern. Millions of Africans including women and children, work in hazardous conditions in these mines due to a weak legal and policy framework.

Both Ghana and Tanzania have taken positive steps by signing, and in the case of Ghana, ratifying the Minamata Convention on Mercury - an international treaty designed to reduce mercury exposure globally - but they have yet to put domestic protections in place.

Admittedly, natural resource governance has complex dimensions, but participants in the upcoming Tana Forum would do well to anchor their deliberations and recommendations in these key pressing priorities.

The participants should take strong steps to stem corruption and recommend actions to ensure that both small and large-scale mining operations are regulated and monitored for their human rights compliance.

They also need to propose actions to ensure that companies doing mining business in Africa conduct due diligence to human rights in their mineral supply chains.

If Africa's leadership doesn't take these steps, the development of Africa's bountiful, natural resources will continue to do harm rather than good.