Canadian prime minister says 'everyone hopes' for a diplomatic solution to the crisis in Ukraine. 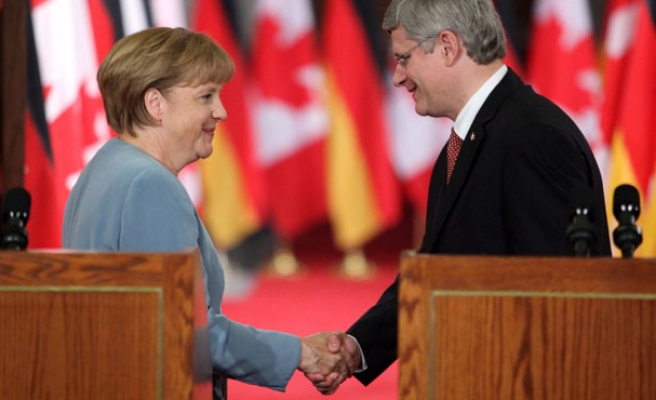 Canada and Germany are on the “same page” on the Ukraine-Russian conflict, according to the German Chancellor who met with the Canadian prime minister in Ottawa Monday.

Angela Merkel made her comment during a press conference after a 55-minute session with Stephen Harper.

For his part, the Canadian prime minister said “everyone hopes” for a diplomatic solution to the situation, but Russian President Vladimir Putin continues his path of “violent” conflict.

“That’s the reality,” Harper told reporters as the two leaders stood side by side at separate podiums. “We are working with our allies. We are considering all options.”

Merkel flew to Ottawa after a meeting with U.S. President Barack Obama earlier in the day.

There are reports that the allied stance on Ukraine has developed a crack as some politicians in the U.S. and Europe differ on whether to arm Ukraine’s military.

But after his meeting with Merkel, Obama said no decision had been reached on the arming question and he, too, hoped that diplomacy, along with the sanctions that have hurt the Russian economy, will bring about a peaceful end to the conflict.

The German chancellor has repeatedly stated her opposition to arming the Ukrainians.

The four leaders are attempting to set up a summit conference for Wednesday in Minsk, the capital of Belarus.

Merkel stated again Saturday that she was opposed to providing arms to Ukraine and instead wanted to try to get Moscow and separatist forces to agree to a cease-fire.

“The progress that Ukraine needs cannot be achieved by more weapons,” she said at a security conference Saturday in Munich.

Canada has stood fast in its condemnation of Russian aggression in Ukraine and has provided $400 million in loans to help Ukraine’s sagging economy. It has also provided tens of millions of additional funds in humanitarian and development aid.

But Ukraine’s top diplomat in Canada told the Ottawa Citizen this past weekend that, “Canada can do more, and we will appreciate anything more, any kind of assistance.”

Merkel and Harper also discussed trade and terrorism, with the German chancellor condemning the “horrible acts” in which two Canadian soldiers murdered in separate attacks by so-called lone wolf terrorists in October.