Millions of children devastated by conflict in 2014

As 2014 winds down, it comes as no surprise that children were hit the hardest by violence and conflict across the globe, the UN children's agency said. 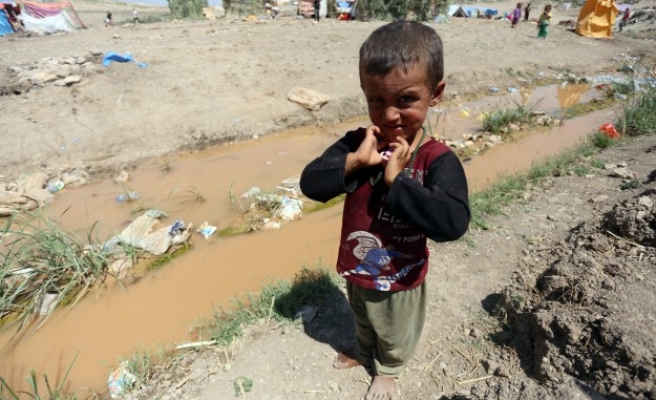 As 2014 winds down, it comes as no surprise that children were hit the hardest by violence and conflict across the globe, the UN children's agency said.

"Children are the ones who lose everything in war zones," Xenia Schlegen, an activist from the Save the Children charity, told The Anadolu Agency. "The problem with being a child in a war zone is that not only are your young years taken away from you, but also your future."

At least 230 million children lived in areas plagued by conflict in 2014, which has been a year of horror, fear and despair for the world's youngest, according to UNICEF, with as many as 15 million children caught up in violent conflicts in the Central African Republic, Iraq, South Sudan, Palestine, Syria and Ukraine.

"Children are the innocent victims of conflicts across the world," said Mervyn Fletcher from Save the Children. "All too often, violence happens in places where children should be safe, including in schools."

A deadly attack by the Taliban on a Pakistani school on Dec. 16 left 140 people dead, mostly children.

Around 2.3 million children were affected by tit-for-tat sectarian violence between Christian anti-Balaka militiamen and Muslim Seleka fighters in the Central African Republic.

The UN said 432 children were killed or injured since the beginning of 2014 in CAR, three times the previous year's figure. Up to 10,000 children are believed to have been recruited by armed groups in the mineral-rich country.

As Syria's civil war approaches its fifth year, more than 7.3 million children have been affected by the conflict, which has created 1.7 million child refugees, according to the UN.

"While the grown ups fight for more resources, sectarian and religious reasons, the little ones, children, are paying the price," Akif Kirecci, head of Ankara-based think tank ASEM, told The Anadolu Agency. "The new world order, some call it 'disorder', opened Pandora's box, (where) several emerging powers started to carve a space for their own or enlarge existing ones."

"The end-result was conflict all around," Kirecci added.

Tens of thousands of children have been killed since the conflict began in Syria, with many losing their lives to hunger, cold and disease.

In the first nine months of 2014, there were at least 35 attacks on schools, which left 105 children dead and injured nearly 300 others.

In neighboring Iraq, an estimated 2.7 million children were affected by conflict in 2014. At least 700 children are believed to have been killed or executed this year, according to the UN.

At least 44 children were killed in the conflict between Ukrainian forces and pro-Russian separatists in eastern Ukraine since mid-April.

Among the one million people displaced from conflict-affected areas in Ukraine, 130,000 are children.

The conflict left around 150 schools destroyed, disrupting the education of some 50,000 children since September.

In South Sudan, around 235,000 children under five suffered from severe acute malnutrition. Around 12,000 children in the country are used as soldiers by armed groups.

In countries affected by the Ebola outbreak, at least five million children aged 3-17 are unable to return to school, Christophe Boulierac, spokesperson for the UNICEF, told The Anadolu Agency via email.

Thousands of children have lost one or both parents to the disease, Boulierac added.